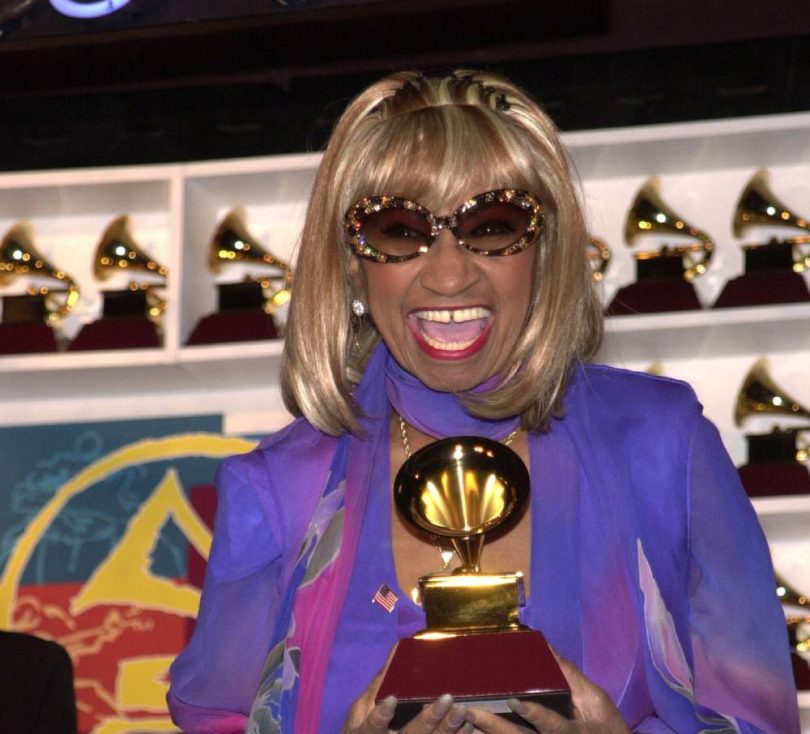 Celia Cruz, who has been called the “Queen of Salsa,” was born in the Santos Suárez neighborhood of Havana, Cuba, in 1925. She was one of the oldest of 14 children and used to sing to put her younger siblings to sleep. Her homemaker mother, who said Celia began singing when she was no older than 10 months of age, encouraged her to make a career in music after she won a singing contest. She was influenced by the diverse musical environment of Cuba in the 1930s, and in spite of her father’s opposition, learned Santeria songs from a neighbor who practiced Santeria. She also learned Yoruba songs from another Santeria singer and made several recordings of the religious genre. While she first followed the advice of her father, a railway stoker, and attended National Teachers’ College to train as a literature teacher – the profession of singer was not quite respectable at the time – she soon left to pursue a singing career full-time in the 1950s, becoming the lead singer in the band La Sonora Matancera. Following Cuba’s revolution in 1959, she and the band left the country. She did not return to Cuba until 1990 when she was invited to give a presentation at the Naval Base in Guantanamo.

Cruz worked as a solo artist, finding her voice with salsa music. During her career she made 37 studio albums and numerous live albums and collaborations, winning many prizes and awards that included two Grammys and three Latin Grammys. She made several appearances in movies, including “Mambo Kings,” and telenovelas like “Valentina” as well. She received a Smithsonian Lifetime Achievement award, a National Medal of the Arts, and was presented with honorary doctorate degrees from Yale and the University of Miami. She received the Grammy Lifetime Achievement Award in 2016, 13 years after her death. In 1994, she received the National Endowment for the Arts award from US President Bill Clinton, and in 2021, the City of New York honored her by naming a street intersection in the Bronx “Celia Cruz Way.” Cruz died in 2003 of brain cancer.