My Pecan Caramel Bread Pudding Recipe is a great and tasty way to use leftover bread. 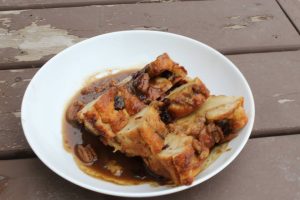