Leo Lee, a reggae producer, was born in Portland in Jamaica at a place called Skebo where his grandfather had a business in 1941. He remembers traveling to Guanlan in Shenzhen, China’s’Guangming New District, to attend school in the 1940s. His father and sister went with him on the month-long voyage from Jamaica by boat. Lee said he was shy as a child, but enjoyed the years he spent in Guanlan, the home of his grandfather James Lee. 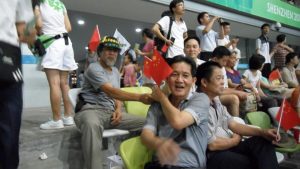 James Lee migrated to Jamaica in the late 19th and early 20th centuries, like many Hakka who traveled to the Caribbean island by steamship from Hong Kong; like many of his countrymen, would spend the rest of his life overseas and never again see the wife he left behind in Niuhu, a hamlet in Guanlan. Leo Lee was sent back to Jamaica when he was 10 years old. When he was 20, he left Jamaica for a holiday in the United Kingdom. The cold and rainy weather prompted him to look for “a better way to enjoy the UK,” and he ultimately applied for the air force and music college on the same day. He had wanted to learn guitar but ended up serving six years in the Royal Air Force.

Lee returned to Jamaica, which had just become independent, in 1966, and experienced the growing economy and cultural changes that have been likened to a revolution. He went to work in the family business, which included a department store in Kingston, but he was unable to ignore the “explosion” in music creativity occurring around him. He noted that many musicians lived near his family’s business and would come by “to catch the bus,” people like Peter Tosh, Gregory Isaac and Jacob Miller. Lee began hanging out with them and attending recording sessions. Lee says his involvement with music “just happened.” He threw a party in the Chinese Athletics Club in 1966 and booked The Skatalites for the event. While Lee never learned music, he has the ability to hear how it flows, and this talent together with his business acumen, allowed him to produce and manage emerging acts during the 1960s and 1970s. He hit the big time in 1978 when he became the manager and producer for The Gladiators, who were pioneers of roots-reggae. Together with the Wailers and The Upsetters, The Gladiators introduced reggae to the world. When roots-reggae went into decline in the 1980s and 1990s, it became difficult for the group to be profitable, and Lee said that the trend toward song lyrics degrading women “just wasn’t for me.” Changing economic conditions in Jamaica also had an impact on Lee and other Jamaicans who began migrating to other countries. Most of his family left Jamaica and migrated to the United States and Canada, but Lee stayed in Jamaica with the family business until 1984. He moved to the US for a while, but ultimately moved to Haren near the Dutch city of Groningen where he lived for the next 20 years.

Lee began traveling back to Shenzhen in China in 1996, visits that became more regular in 2002 when he realized someone had to take care of the family home. He was the obvious choice to do so since he is the only one among his brothers and sisters who speaks Hakka. In 2010, he decided to open a business there and opened the Reggae Cafe, joining with artists in the Guanlan region and becoming a part of the community. Visiting the area recently at the age of 73, Lee remembered the school he attended in Laoyi Village, one of the two old villages that remains in Niuhu, He remembered looking out from his family house there and seeing farmlands that stretched as far as he could see: rice paddies, fruit plantations, and many trees. Now, there are fewer trees, and some of the mountains have been leveled as China undertook its industrial revolution, which has made the region much more profitable than it was when Lee went to school there.

Commenting on his full-circe return to his ancestral land, Lee quoted a Chinese saying: Though a tree grows high, the falling leaves return to the root. Lee says that no matter his level of success or the extent of his travels, as a son, he must return to his ancestral home. Leo Lee, with his creation of the Reggae Cafe and his strong identification with hi Jamaican roots, has done just that.