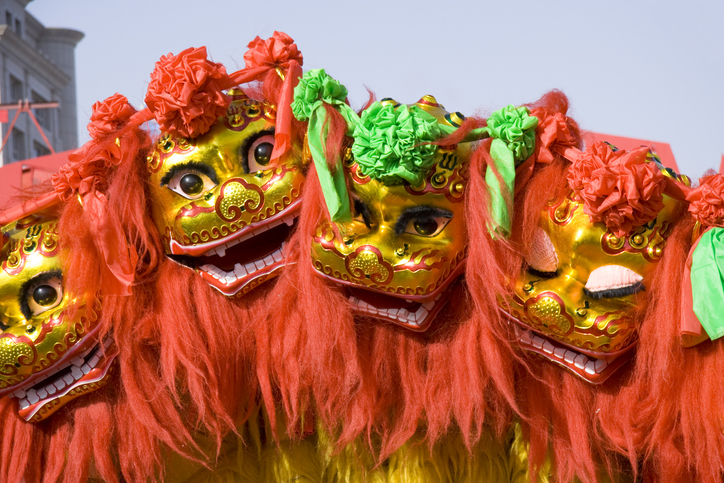 Chinese New Year is the most important festival in the Chinese calendar. It is a time of family gatherings feasting games dances and merrymaking.  Family members living thousands of miles away from their homes will make the journey to be with family members, relatives, and close friends and there are special rituals and customs that must be observed in order to ensure good luck and well being for the year ahead.

A week before, the house must be cleaned from top to bottom, repaired where necessary and painted. At least the front of the house. The kind of cleaning we refer to as Spring cleaning. Matter of fact since the change of Government in 1949 in China, the festival has been named the Spring Festival. All the old useless things are discarded, and the accumulated debris and rubbish, removed and disposed of. Special new clothes are bought or made for the family, especially the children. And it is the time when children are given special gift of “Lucky Money”, in neat little red envelopes called in the Hakka dialect Fung Bow.

The other custom that must be observed has to do with money or other debt you owe. This must be repaid before New year’s day, and not only that, you must forgive and settle all the existing disputes and problems.

As children growing up in a village shop in rural Jamaica in the 50s and 60s Chinese New Year was one of the times we eagerly looked forward to. Perhaps more so than Christmas. In fact, the celebration was called by our Jamaican friends “Chiney Chrismus”. But It was the only time when no sale was permitted in the shop by our father. Christmas, Sundays, other holidays we were allowed to sell items from the window…But Chinese New Year no, and of course Good Friday, like Good Friday no meat was eaten, and the big feast would take place,

for convenience, either the Sunday before or the Sunday after the real day.
Father would spend almost the whole week preparing the various ingredients for the meal, and very early in the morning the cooking would begin, that is for the things that couldn’t be cooked the day before.

Our guests would be the teacher, the police corporal the Postmistress, and very special people. We were allowed to invite a few of our close friends, but it was a grand time, and the food was always very special. There had to be a minimum of seven dishes for good luck, and this must include a whole fish. Citrus was a must and included shaddock for good luck The most popular dishes with our guests, were roasted chicken and roasted suckling pig . At about 4 PM the eating started. Other Chinese families living nearby would also be invited, and the head of each visiting family would give each of us children a Fung Bow. For that purpose all unmarried children were included, age did not matter. But the feasting must end before midnight on New Year’s Eve. New Years day was spent very quiet compared to the day before.

There was too the letting off of firecrackers, strings of them to chase away the evil spirits, and good luck signs and wishes written on red paper were hung at the entrance. New Year’s day was also celebrated by every child as their birthday, and when presents were given, clothes toys and of course the Fung Bow. This is also the day when the gods and the ancestors are honoured with lighted candles and incense and food and inscriptions placed on their shrines.

We children spent the time searching for the firecrackers that did not explode. Where there was the tiniest wick we tried to fire them, but if there was no wick, we would cut them in half, exposing the powder and with a fire stick “Toosh” them being careful not to get burnt.

Sometimes we did, slightly. But the fun we had was far more than adequate to compensate for the little pain. Father and his friends would spend the day playing Mah Jung their favourite Chinese game. Some Jamaican friends who knew the game were also allowed to play.

Chinese New year is perhaps the only Chinese festival celebrated by the Chinese-Jamaicans as a community, though individuals still celebrate Moon Festival, Chin Ming and other minor observances.

February 14 we start the year of the Tiger, one of the 12 animals of the Chinese Zodiac, and the prognosis is, it will be a very auspicious year especially for those born under that sign. Kung He Fat Choy, to the young and Tiam Fook Tiam Sue to the older folk, that means Happy New year good health, good fortune and all the best, and for the young adults, Tiam den Fat Choy I, a wish for a thousand sons.

Easton Hugh Lee, Born at Wait-a-bit village in Jamaica to a Chinese father and a Jamaican mother of mixed racial background. He spent his early years in a village shop. Educated in Primary, Secondary schools in Jamaica., and at the University of the West Indies. Studied Radio broadcasting(BBC)Theatre and Television in the USA. California, Practiced and taught Theatre and Broadcasting and is the recipient of several Jamaican awards. Commander of the order of distinction (CD.) Silver Musgrave Medal, from the Institute of Jamaica, The Prime Minister’s award for excellence. A published author, to date four books. Studied Theology at the United Theological College, and was ordained  Priest in the Anglican Church in 2000.  Easton’s books are available by contacting him at: eastonlee AT bellsouth.net