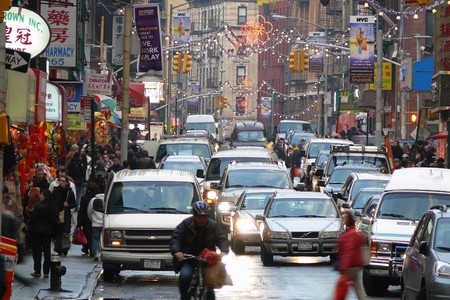 The one flaw Uber riders have is that the majority of them expect you to work miracles.  I cannot count the number of times I’ve had a rider want me to take them to their destination for which they are already running late, but they want me to get them there 15 minutes ago!  Riders – please, if you know you are already late for your destination, don’t blame your Uber driver or expect them to break the speed limit to get you to your destination.

On the other hand – you have those passengers who are a pleasure to drive around.  One of those passengers I happened to pick up in Manhattan.  Now normally I don’t like working in Manhattan, the traffic is a total nightmare and there’s nothing I hate more than sitting in traffic that’s not moving.  In addition, I find that Millenial Manhattanites have an inflated sense of entitlement that just sticks in my craw.    Anywho back to my nice passenger.  I picked her up in Manhattan on a return job from JFK when I’d taken the Queensboro Bridge to avoid the Whitestone Bridge which was backed up (did I tell you how much I loathe sitting in traffic?).  I picked her up in Midtown and she wanted to go to Newark Airport.  The GPS took me enroute to the Holland Tunnel and on this Friday before the Memorial Weekend the traffic was beyond hellish.  I kid you not, the approach road to the tunnel was worse than a parking lot – nothing was moving.  Turning from Watts Street into Canal Street, I couldn’t believe the stupidity of some drivers, I saw an opening to my right, but was blocked by the car in front – the passenger seemed not to have noticed the opening – if only he would move over to the right, then that would free up some congestion, but he just sat there blocking my exit.  I got out of the car and politely asked him to move over to the right so I could gain access to the open lane.  He sat looking at me as if I was speaking gibberish.  As a proactive driver, I backed up and quickly drove around him – zooming down the open right lane.  I didn’t get too far before hitting another roadblock.  The intersection was blocked and again traffic was at a standstill.  The frustration meter was mounting steadily as we sat for at least 30 minutes while the cacophony of car horns got louder and more insistent.  A fruitless exercise since nothing was moving anywhere.  Again I got out of the vehicle and explained to the drivers to my left that they should make a left turn as they would be re-directed to the Holland Tunnel by their GPS systems.  Like sheep – they just sat there, waiting expectantly for the traffic to move – unfortunately it wasn’t.  Luckily I was able to convey the urgency of my predicament; I had a passenger trying to get to Newark for her flight to London!

Eventually, we squeezed through an opening and were on our way again.  We had to encounter another log jam on the approach road to the Tunnel, but once in the tube, we made great progress.  Despite the earlier setbacks, I was happy and proud to deliver the passenger to her destination in good time for her international flight and was rewarded, not just with her praise and gratitude, but a healthy tip.

That’s just one of the rides where one’s ability to be proactive and not afraid to take the initiative leads to a happy passenger and less time sitting in a hopelessly gridlocked traffic jam.