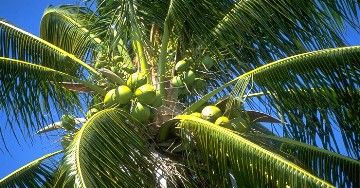 The average annual temperature is 82°, but expect temperatures to be hotter during afternoon hours (and feel much hotter because of high humidity levels). Fortunately, the island is blessed with northeasterly trade winds that keep you from sweltering no matter what time of year.

Hurricanes
Mention weather and the Caribbean in the same sentence and, quite predictably, the topic of hurricanes arises. These deadly storms are officially a threat from June through November, although the greatest danger is during the later months, basically August through October. (September is the worst.)

Hurricanes are defined as revolving storms with wind speeds of 75 mph or greater. These counterclockwise storms begin as waves off the west coast of Africa and work their way across the Atlantic, some eventually gaining strength and becoming tropical depressions (under 40 mph) or tropical storms (40-74 mph). Excellent warning systems keep islands posted on the possibility of oncoming storms.

Atlantic hurricanes are ranked by the Saffir-Simpson intensity scale to give an estimate of the potential flooding and damage. Category Three and higher are considered intense.

One
74-95
Minimal: Damage primarily to shrubbery, trees and foliage.

Two
96-110
Moderate: Considerable damage to shrubbery and foliage. Some trees blown down. Some damage to roofing materials.

Four
131-155
Extreme: Complete failure of roofs. Major beach erosion. Massive evacuation of all homes within 500 yards of shoreline. Hurricane Andrew, which hit South Florida in 1992, was a “Force Four.”

Rainfall
Rainfall varies with the season. Overall, the island gets an average of 78 inches a year (one look around at the lush vegetation and you’ll see that it’s put to good use.) The lion’s share of the rain falls in the misty Blue Mountains, source of some of the world’s best coffee. Usually along the coast, rain showers are brief and heavy, coming in mid-afternoon and clearing up before you can run inside. The rainiest months are May and October.