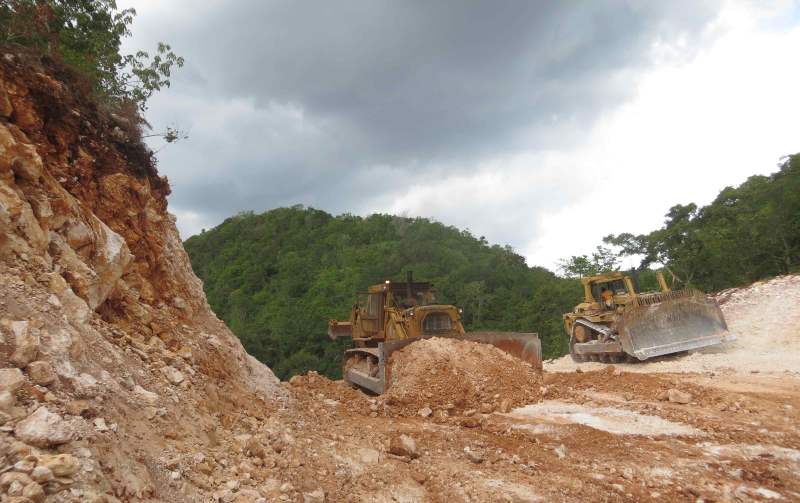 The Jamaica Environment Trust (JET) is alarmed to receive reports that extension of haul roads and deployment of mining equipment has begun within Cockpit Country borders south of Stewart Town. Despite numerous assurances from the Government of Jamaica (GOJ) that bauxite mining would not be permitted in Cockpit Country, reports from community members and site visits by a member of the Cockpit Country Stakeholders Group (CCSG) have confirmed that Noranda Jamaica Bauxite Partnership (NJBP) has begun these mining operations.

The Government of Jamaica (GOJ) commissioned a Cockpit Country boundary study to be done by the University of the West Indies (UWI) and this was completed in 2008. The public consultation process on mining in Cockpit Country as well as the proposed boundaries was done in 2013. The report released in September 2013 concluded: “The Government of Jamaica (GOJ) should not authorize any form of exploration of mineral deposits, mining and quarrying activity within the Cockpit Country as the level of emotion is too high and level of opposition and resistance by community members and leaders, CBOs, NGOs and civil society organizations, some Government of Jamaica agencies and members of the academic community may not provide enough guarantee and confidence for potential investors.”

“To now learn that the GOJ has gone ahead and allowed Noranda to begin mining operations in Cockpit Country without any dialogue with stakeholders and without the declaration of the long promised boundary and protection regime is an appalling breach of good faith,” said JET CEO, Diana McCaulay. “According to Noranda’s website, the mining operations in Jamaica are carried out by Noranda Jamaica Bauxite Partnership, which is owned by the GOJ (51%) and Noranda Bauxite Limited (49%). Our own Government is the majority shareholder in this operation.”

JET understands that the current operations by Noranda have not obtained an environmental permit under the Natural Resources Conservation Authority (NRCA) Act, which is required under Jamaican law, nor has there been any requirement for an Environmental Impact Assessment (EIA).