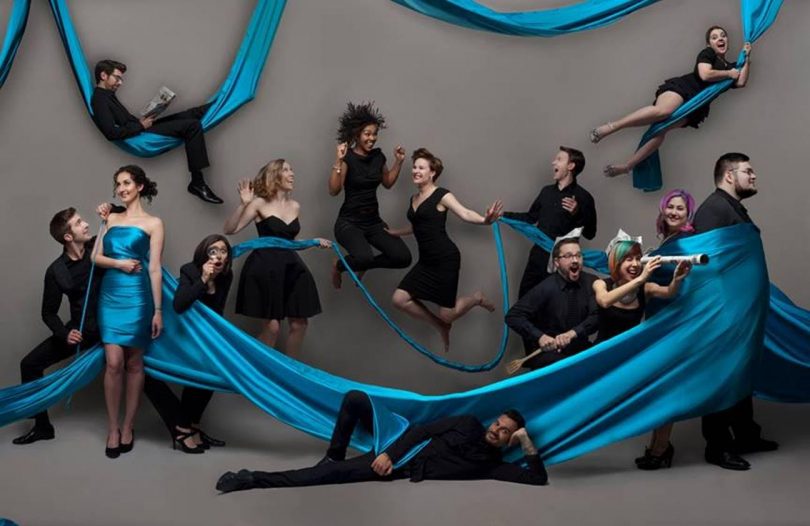 Toronto’s own dynamic a cappella sensation Countermeasure is the new sound in vocal music, known for their sophisticated harmonies, seamless blend, and infectious energy. Featuring 14 of Canada’s top young vocal talents, the group’s genre-defying contemporary sound has earned them both critical and public acclaim the world round. Having released their sophomore album MADE TO MEASURE to public and critical acclaim in July of this year, the group is currently touring their “14 Characters” show and recently experienced an “engaging” moment at the Edinburgh Fringe Festival.

More than just a really fun and entertaining show, a cappella group Countermeasure really knows how to “engage” audiences. When Countermeasure singer Steve Cole decided to propose to his girlfriend, Dawne Shonfield, he knew it would be during their visit to Edinburgh but was looking for the perfect moment. And he found it – in the middle of a Countermeasure performance at The Space at Edinburgh Festival Fringe! He picked Dawne to go on stage for their regular Copacabana song routine, which has audience members trying their hand at singing, dancing, and beat boxing.

To the surprise of cast and crew, Steve stopped the show and gave a heartfelt speech about Dawne being the song in his heart. And then he got down on one knee, proposed marriage, and she said “yes”!  Tears flowed on stage and in the audience – and then a choked-up Countermeasure had to finish the show with their signature “Takin’ It Home.” Expect the unexpected at a Countermeasure show!

Since Countermeasure’s inception in 2010, the group has stood apart from other contemporary vocal ensembles, showcasing at everything from choral concerts to jazz festivals, nightclubs and art projects.

Dubbed “The leading a cappella chorus out of Toronto” by the Washington (D.C.) Examiner, the group has won kudos from critics and fans alike. East Coast FM 107.6 (Edinburgh) gave them “*****(5 Stars),” and “This is a win for Canada” was the praise from Toronto’s G987FM Radio.