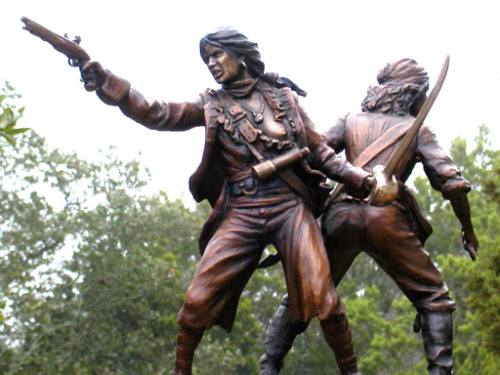 When Jamaica’s governor captured the infamous pirate Calico Jack Rackham in 1720 off the coast of Negril, the authorities and public alike were shocked to discover that there were two female members of his motley crew, Mary Read and Anne Bonny. Both were fierce fighters credited with putting up a considerable fight at the capture.

In the words of Anne Bonny, “If you had fought like a man, you would not now be hanged like a dog.” Mary Read had been born in London and lived most of her childhood disguised as a boy, it is said. Still disguised as a male and taking the name of “Mark,” Mary found work on a ship, but finding ship life was not what she expected, she jumped ship and joined the British army as a foot soldier.

When she fell in love with another soldier and confessed her real gender, they married, left the army, and opened an inn called “The Three Horseshoes” in England. When her husband died after a few years, Mary once again put on men’s clothing and joined the military only to leave it again to join a ship bound for the West Indies.

On route, the ship was captured by pirate captain Calico Jack Rackham and she became a member of his crew, where she met Anne Bonny, Rackham’s mistress. Bonny quickly realized Read was a woman and the two became good friends. They often fought in battles together and gained the respect of other crew members for their strength and courage.

Anne had met Jack in the Bahamas, where she had come with her husband James Bonny in search of adventure. Anne decided to leave her husband and, disguised as a man, snuck on board Jack’s ship, where her gender was discovered by Captain Jack and their affair began. It continued until Rackham and the crew were captured off the coast of Jamaica.

At trial, both women were granted special consideration since both were pregnant at the time; their executions were delayed through several stays until they had given birth. Mary died in prison of a fever, and the fate of Anne is unknown although she did leave prison and the island. The burial of Mary and her unborn child was recorded in Port Royal in 1721.