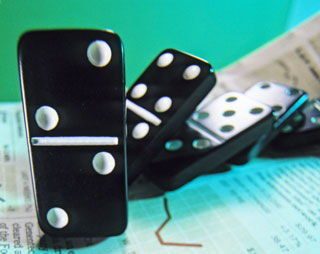 Yea Mon! Ebry Satideh throughout the bittah cowl wintry months Jumakecans and other Caribbean-Nationals here in Toronto link-up at the Marcus Garvey Centre for Learning & Enterprise to play or cheer on their favorite team in the (CDL) Canada Domino League Championship Tournaments . Yes Iyah! Although many a wi dey yah fram when Pierre Trudeau and Michael Manley was alive and was bosom buddies, wi still noh fahrinize a rhatid. No sah, wi still hang on to wi culture, shuffle and slam domino pon table han drap six love…han bettah yet, wi noh haffi wait till noh dyam nigh-nite fe do dat…Canada Domino League provides just that for us.

Mi seh… not even little indoor curling or bowling is to our likening let alone winter outdoor activities. But as for curling, what kind of sport that is though sah? Anybody can tell mi? People a slide pon dem knee han a leggo sinting favor kettle while another one a shine the floor fe de blasted kettle slide pon…Mi sah! Affta anoh durt a wash my clothes.

Yes, as I was saying, (since mi so easy fe get distracted) domino is a game that was mostly played in house basements here in Toronto. However, since 2001 CDL has emerged as the vehicle that has brought domino to a level that can now revival any professional sports. The Tournament is now being sponsored by the Jamaica National Building Society Money Transfer Division of Toronto and Air-Jamaica Ltd. The competition is very well organized, highly competitive and exciting. The participants are identifiable by their team jersey and the games are monitored by referees and video cameras with frequent media coverage.

There are two divisions, a coding and a non-coding. (Coding is to indicate by making signs or gesture to a partner the dominoes drawn and which one to be played etc). Contrary to popular beliefs, coding involves quick thinking and the development of strategies during play; reading and also pin pointing with accuracy what specific dominoes(s) the opposing players have while constantly changing codes so as not to allow the opponent to decipher yours, and of course counteracting the opposing strategy of play etc.)

Both divisions are run under very strict rules of conduct and the level of play is one in which the novice strives and where veterans seemingly struggle to keep past fame and glory. Championship Trophies are distributed at end of the tournament as well as individual trophies for (MVPs) most valuable pairs and to the runner ups as well. The top four teams of both divisions are also rewarded with cash and other gifts such as Air-Jamaica Airline tickets.

Like wrestling, domino players take onto themselves certain alias that somewhat identifies with their character, or their philosophies or perhaps someone they admire. This brings much joy to the onlookers especially as the winners rise with hilarious taunts before bowing out their hands. Names such as the Warlord, Isaiah the old Prophet, Taliban, Lickle Wicked, Al Samood Missiles, Teacher, and Axe man are used. Several females participate and are just as epic as their male partners in coding, calling the game, taunting and bowing.

At the Domino Tournament the atmosphere is one of pure Jamaican niceness. It brings about a sense of identity, brotherhood, unity, love and care. There, elders congregate in small groups, some don’t have any interest in domino, but for them, it’s their little meeting place. A forum in which they get to see old comrades, make new friends and debate and reason in historical, social, religious and political arguments.

CDL Tournaments is more liken to a cultural assembly that provides an audience for those with reminiscing tales from days of back a yard. Taking turns, they each tell their story with razor sharp memory, their lines comical with lyrics flowing just as freely from their lips as the liquor they sip, while the listeners laugh till them belly almost bus.

Music is much apart of the domino tournament, likewise the delicacy of free curry goat and rice served to all at half time. A continuous flow of mento, calypso, ska, rock steady, conscious, hardcore, soul and even at times gospel music bellows and mellows at reasonable decibels. It is quite soothing and enjoyable, irie and nostalgic.

“Yellow-man” undoubtedly one of Toronto’s top domino player provides added entertainment at half time. He is as exceptionally talented a dancer as he is a domino player, “skanking” to the beat of every tune, drawing rounds of applauses from the ring of people around him. Had I his gift, I would have procure me a license so I could showcase my talent at a subway station and I‘m pretty sure within a year or so I could easily finish up a two bedroom house on a piece a capture land in a Panish Town.

Yet on several occasions some “denture wearing wrinkled ole foot” would put Yellow-man to a challenge, thus driving the crowd to frenzy. They would dance to the horns of Don Drummonds and to songs like, “Old Madaliza” and “Sammy plant piece corn dung a gully, han it bear till it kill poor Sammy.” In the end, really and truly, it would be anybodies guess as to who normally comes out on top. All mi can say is that those ole people was some real ole jezebel in a fe dem young days.

Entertainment is always there for the younger ones too. Lodi, snake & ladder, pin the donkey tail, ping pong tables, draft boards and card games. Should they feel “peckish” there is tambrine ball on sale, greater cake, drops, patty and all sorts “a sinting” at affordable prices.

During the games, lessons at no cost are taught on African and Caribbean History, Languages, Accounting, Drama and Computer Programs in sound proof rooms to adults and children alike. CDL promotes and encourages literacy and skills development among its members and visitors that will aid each individual in their own growth and potentials.

In its five years of existence the league has made much progress and has played teams from the USA, Jamaica and England with some tangible degree of success. Any domino team desirous of hosting a Canada Domino League Team or wanting to visit Toronto to participate in the 2007 CDL World Championship Domino Tournament or to just play a “friendly match” should send request/questions to [email protected]