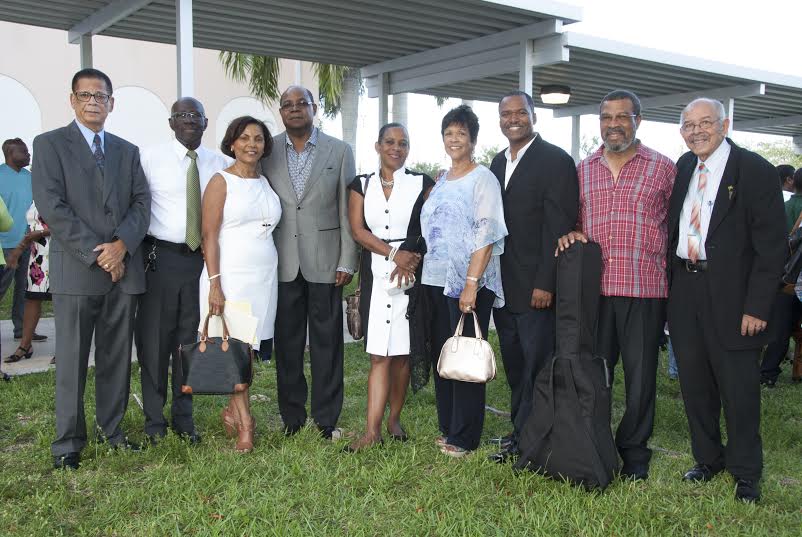 A call has been made by former Minister of Tourism, The Hon. Ed Bartlett for the renaming of Jamaica’s Memory Bank to “The Olive Lewin Repository of Oral History”.

It was standing room only at the Olive Lewin Heritage Foundation’s first Anniversary event which was held at the Broward SW Regional Library auditorium in Pembroke Pines on Saturday July 11th 2015.
The capacity crowd, led by the Minister Bartlett and Mrs. Bartlett, Jamaica’s Vice Consul Dale Jones (Miami), Major (ret’d) Johanna Lewin (daughter of Dr. Olive Lewin), and the immediate family of the late Dr. Clover Thompson-Gordon, was treated to an afternoon of music, history, teachings and presentations, reflecting some of the research done by Dr. The Hon. Olive Lewin O.M., Anthropologist, Ethnomusicologist, Musician, Teacher, Researcher and international scholar.

Minister Bartlett described Dr. Lewin as an iconic Jamaican woman; a true champion of Jamaican folklore and cultural expression. Bartlett observed- “In 1943 Lewin won the coveted West Indies scholarship to the prestigious Royal Academy of Music (in London). She was the only black student.   In recounting her experience at the Academy she once remarked: “It was there that the neglect of our indigenous music struck me with full force.  I realized that composers such as Bach, Handel, Mozart and Beethoven were human beings and products of their time and environment.”  She became determined and went on “to work towards the understanding, study and appreciation of Jamaica’s music”. Olive saw Jamaican music and folklore as no less legitimate or no less worthy of academic inquiry, and scholarly documentation than that which would have been deemed to be the more conventional, orthodox, classical, and I dare say, acceptable forms of musical expression. It was with a bold and fearless mind-set that Olive established herself as an anthropologist, ethnomusicologist and cultural historian of note.  To her eternal credit, she spent the better part of her adult life working assiduously to pull Jamaican folklore out of the shadow of Eurocentric prejudice “

A video clip of old Jamaican customs and music, which was in part narrated by Dr. Lewin herself, was shown to an enthusiastic and captivated audience, which included Mitsy Seaga and cultural emissary Norma Darby, as they keenly absorbed little known aspects of Jamaica’s history. Each facet of life captured in that clip was accompanied by a fitting Jamaican folk song (some not known to many), arranged by Olive Lewin and sung by the Jamaican Folk Singers- a group formed by Dr. Lewin in 1967.

Major Johanna Lewin congratulated the Foundation for continuing Dr. Lewin’s work, and gave some history as well , singing the set-up song “Cockroach did buil’ one thee-foot wall” to the tune “As pants the hart for cooling streams”, which was composed by George Frederic Handel for the Chapel Royal of Queen Anne. “You see, the Jamaican ancestors ‘borrowed’ some tunes from the plantation owners and applied their own words to tell their own stories!” said Steve Higgins, Executive Director of the Foundation.

An emotional tribute was paid to Dr. Clover Thompson-Gordon, the late Deputy Executive Director of the Foundation. The Jamaican Folk Revue and The Sierra Norwood Calvary Baptist Church Children performed, followed by the 40- voice strong South Florida Caribbean Chorale, which gave a moving rendition of the CREED from Olive Lewin’s Folk Mass. This was rendered publicly for the first time in Florida, with accompaniment on drums by Johanna Lewin & Colin Smith.

The evening ended with ring games on the lawn of the library, where children – young and young at heart- participated enthusiastically in singing of Jamaican Folk songs.