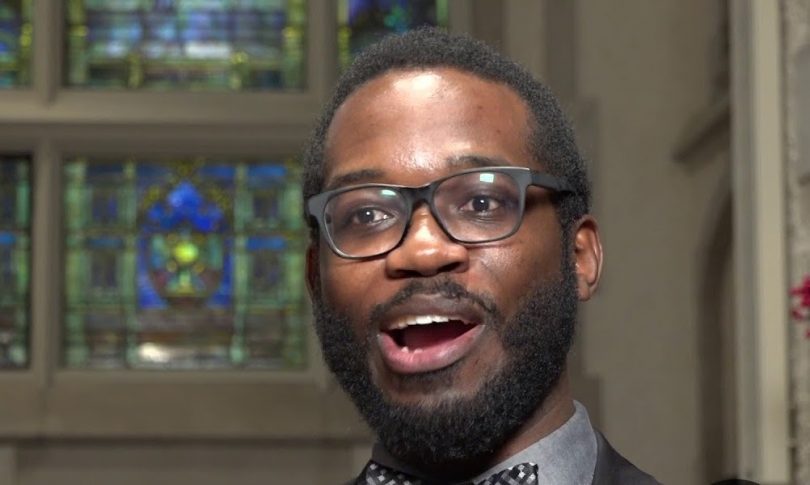 In 2014, Jamaican-American Joel Thompson, wrote a song that he never meant for anyone to hear. It was an outpouring of his anger, grief, and sadness over the deaths of Michael Brown and Eric Gardner at the hands of white police officers. That 15-minute song entitled “The Seven Last Words of the Unarmed” has now gained national attention and he was featured in the New York Times.

Thompson posted the song to social media seeking help to fully flesh it out, following the death of Freddie Gray, another black man who died in police custody. He found a kindred spirit in Dr. Eugene Rogers, director of choirs at Michigan State University. Rogers and the university’s Men’s Glee Club premiered the song in Oct. 2015. It echoes the words of black men that have been killed during encounters with police, ending in “I can’t breathe.”

The work elicited a lot of negative reaction from the choir, its alumni, and audiences, all of whom were predominantly white. Following the death of George Floyd and expansion of the Black Lives Matter movement, the song gained new life. Carnegie Hall even streamed a recording of the work on its social media and website on June 4.

Thompson, who was born in the Bahamas to Jamaican parents, moved to Houston when he was 10. He was going to pursue pre-med studies when he was introduced to classical music as an undergrad at Emory University in GA. Music prevailed and since then, he’s been the director of choral studies and assistant professor of music at Andrew College, taught at Holy Innocents’ Episcopal School, both in GA, and been a composition fellow at the Aspen Music Festival and School.

He’s currently a full-time student at Yale and will begin his doctorate in musical arts in Sept. 2020 as only the fourth or fifth black person to do so. Thompson has been commissioned to write a variety of pieces, including one about the 1956 Tallahassee bus boycott for the Tallahassee Symphony Orchestra. “The Seven Last Words of the Unarmed” won the University of Michigan’s Hermitage Prize.

“The Seven Last Words of the Unarmed” was part of the 2017 music documentary “Love, Life & Loss.” The documentary was nominated in seven Emmy Award categories and won five at the National Academy of Television Arts and Sciences. Thompson won with Eugene Rogers in the Craft Specialty-Music Composition/Arrangement.