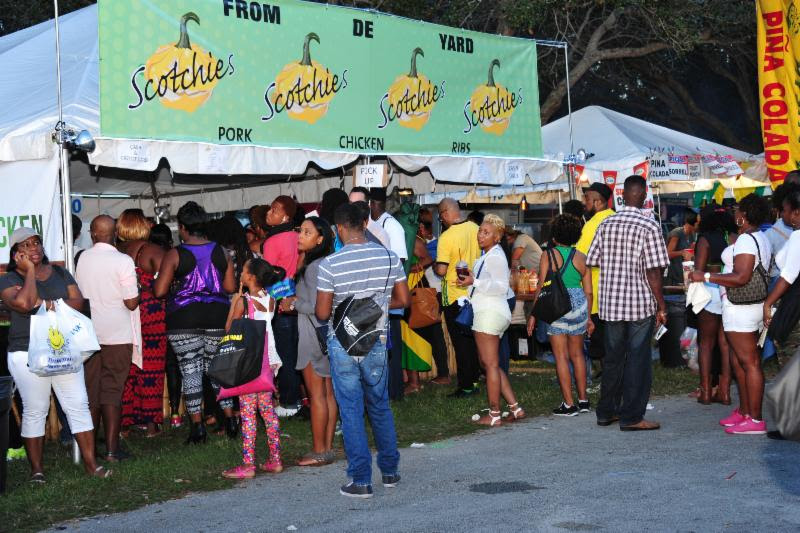 On a perfect day, without even a menacing cloud in sight, some 14,000 patrons descended on Markham Park in Sunrise for the 14th Annual Grace Jamaican Jerk Festival. Diehard Jerk Festival fans and some first-timers came for their “taste of fun” but got that and so much more.

The event on Sunday (November 8, 2015), was marked by an infinite variety of delicious Jerk foods and all-day fun with cooking competitions, domino matches, cultural presentations and the riveting entertainment on the Main Stage-where the legendary Barrington Levy rounded brought the event to a close, leaving patrons more than satisfied.

Guests in the VIP area basked in the luxurious setting where everything from the decor to the food was top notch. With celebrity chef Patrick Adams, executive chef to Republican presidential contender Donald Trump, and his team of culinary experts in the kitchen, VIP guests dined on delectable dishes throughout the festival. With all that, and stage front access to the Main Stage, the VIP experience was priceless.

Epic Battles
Over by the Publix Culinary Pavilion, epic battles were fought and the chefs and celebrities with the best cooking chops took the top spots in the fiery competitions.

In the Celebrity Quick Fire Challenge dubbed “The Battle of the Beauties,” Miss Universe Jamaica 2014, Kaci Fennell took the crown, deftly staving off challenger and fellow beauty queen, Miss Jamaica World 2008, Brittany Lyons. In this matchup, patrons got a feast of the eyes … and of the palate. In the end, Kaci, who also won a Grace Jamaican Jerk Festival cooking competition in New York earlier this year, reigned supreme.

In another celebrity showdown, Simeon Hall, Jr., executive chef and Pop-up Restaurant King from the Bahamas retained his title when he went head-to-head with Chef Ron Duprat, executive chef at Montauk Yacht Club in the Celebrity Chef Throwdown.

And in the main event, five professional chefs did battle in the fierce Publix Jerk Cook-off, creating spectacular jerk dishes, while displaying their skills in the kitchen. “In the first year of having professionally trained chefs, the stakes were high and they brought it to the table,” says Cook-off Coordinator Karen Grey. “Our judges spared no criticism, they asked the tough questions and made the hard decisions, based on taste and presentation, organization, culinary skills and most importantly the use of this year’s secret ingredient (sorrel) in all their dishes.”

Chef David Stample emerged the winner of the coveted Golden Dutch Pot Trophy and cash prize of $1,500, with Chef Freddie Famble taking the silver and $500 and Chef James Lubin taking the bronze and $250. “This is what makes our festival the best and biggest Caribbean food festival in the USA,” Grey adds.

In the heated Domino tournament[1] , Mark Ashby emerged victorious, walking away with the top prize of $1,000. Melissa Gordon, who finished 14th place overall was recognized as the top female player and received $125.

A Taste of Authentic Culture
Entertainers on the Western Union Cultural Stage along with roving poets delivered a healthy dose of family-friendly culture-rich performances. From dancing by the Vision Dance Company and poetry from Sheldon Shepherd, to a fashion show showcasing Maxwell Royalty designs, patrons got hours of high-quality entertainment.

Over on the FuZion Soundstage, the Army Gideon Band, local acoustic guitarist, Sekajipo and many others made good on their promise to bring their A-game to the stage. For many, this is their annual cultural fix — a taste of authentic culture — that transports them back to their childhood days in Jamaica and exposes their children to the richness of Jamaican culture.

From Reggae to Classical
The excitement on the Main Stage has always been a bonus for Jerk Festival fans, and this year was no different. With VIP guests right in front of the stage and a sea of excited patrons clamoring for a good “stage show,” the entertainers delivered impressive performances — from reggae to classical — to close out the 14th annual event. International German artist, Gentleman sang reggae music in authentic Jamaican vernacular and accent sending the crowd in a frenzy. Christopher Martin[2]  was outstanding on the stage, delivering his hits, including a special tribute to John Holt, which had the audience fully engaged.

Not to be outdone, the legendary Third World, with new frontman, the indelible A.J. Brown, delivered a stellar performance of some of the band’s popular hits. And to sweeten the pot, Brown thrilled fans with the iconic, classical piece, “Time to Say Goodbye” (Con te partirò) sung in Italian. This was arguably the highest point of his performance. Of course, the Main Stage madness was taken to the next level with comedian Chris “Johnny” Daley[3]  and radio announcer Jody-Ann Gray, who entertained the crowd with their antics and humor.

As the final act, reggae veteran, Barrington Levy performed some of his greatest hits, bringing to a close another successful Main Stage event, and a phenomenal Jerk Festival. 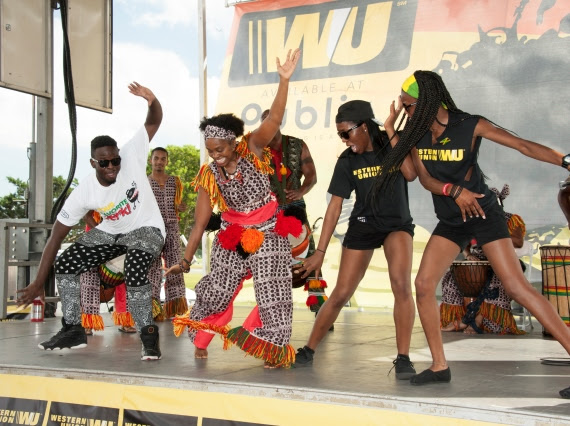 Scotchies from Jamaica – one of the many vendors offering a variety of jerk dishes at the 14th annual Grace Jamaican Jerk Festival in Sunrise, Florida.