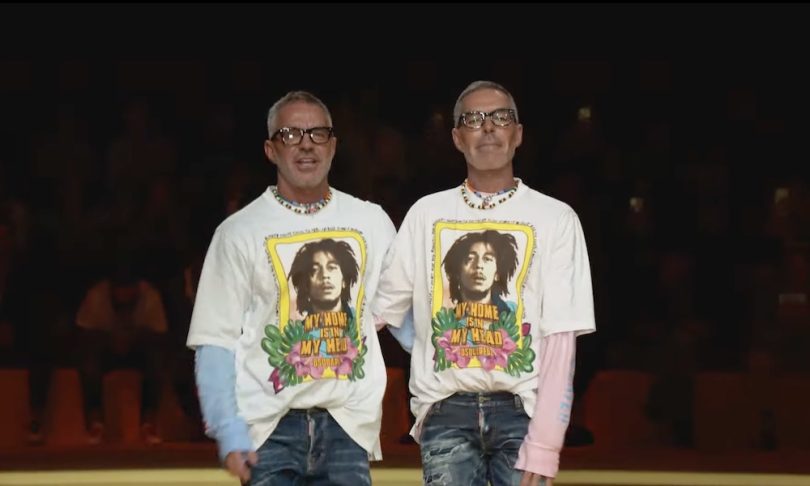 Fashion design house Dsquared2 opened Men’s Fashion Week in Milan, Italy, with a new collection that honors Jamaican reggae musician Bob Marley. The show mounted by Canadian twins Dean and Dan Caten of Dsquared2 was created in a collaboration with the Bob Marley Foundation, which gave its permission for them to reproduce the image of Bob Marley on t-shirts, beach totes, and bags.

The Catens noted their love of the “vibes” of 1970s Jamaica and Marley’s messages of peace, love, and the joy of music as their inspiration for the new men’s collection. They cited iconic elements like the colors of the Jamaican flag as part of their designs. The Catens added that Bob Marley’s “relaxed and cool” style of freedom was perfect for the world’s celebration of a return to the ability to travel after the long COVID-19 lockdown. The spring/summer men’s collection features items including flared jeans embroidered with marijuana leaves, tie-dyed shirts, maxi nylon shorts, and hooded sweatshirts.

Twin Canadian fashion designers Dean and Dan Catenacci were born in Toronto in 1964. Their father is Italian, and they have seven older siblings. They moved to New York to study at the Parsons School of Design but left after one semester to return to Canada. They started their first womenswear fashions in 1986, and in 1991, they moved to Milan to work for the fashion house of Gianni Versace. Their first men’s collection was launched in 1994, and their DSquared2 brand was established in 1995.

The Catens are known for their spectacular fashion shows, and their lines are popular with celebrities. In 2000, Madonna had them design more than 150 pieces for her 2001 tour and a music video. In a runway show in 2005, singer Christina Aguilera stripped the clothes off male models. Rihanna was featured in a 2007 show in Milan. Since then, Dsquared2 stores have opened around the world, with recent openings in Miami, Doha, New York, Rome Prague, Madrid, and Istanbul. Their designs have been worn by Britney Spears, Justin Timberlake, Kendrick Lamar, Ricky Martin, Nicolas Cage, Lenny Kravitz, and Fergie