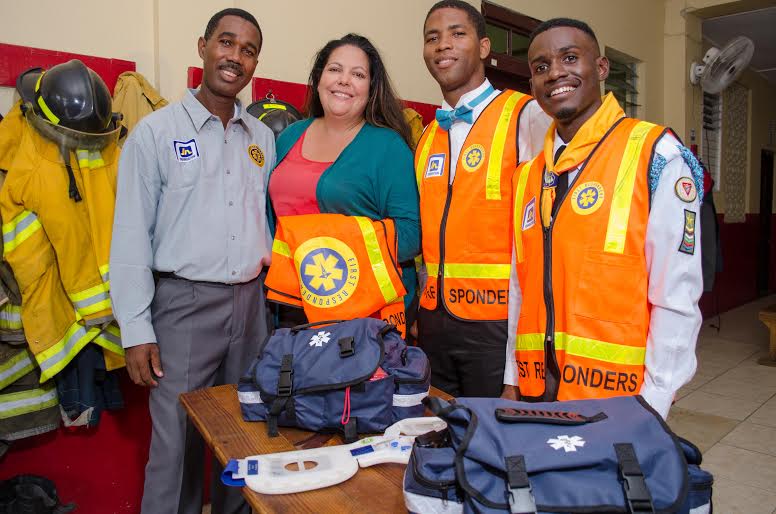 Marlon Brown was caught in a traffic buildup, as he headed for work, in a taxi, on the Landovery main road in St Ann on March 1 this year. His first concern was about how the delay would affect his commute to St Ann’s Bay.

A firefighter, based at the St Ann’s Bay fire station, Marlon was on his way to drop his daughter off at day care before reporting for his 3:00 pm to 10:00 pm shift.

“I called out to persons to establish reasons for the blockade.  Finally, one guy shouted back, ‘a just two truck crash up the road, and one man stuck,’” Marlon recalled.

Once he realised that a crash had occurred, Marlon’s training as a First Responder kicked in and he went into action.

“Immediately my training chipped in, and I called the fire station and told them to dispatch the unit as there was an accident”, he explained.

Marlon was one of 15 volunteers in the parish of St Ann who had benefited from training in Emergency Medical Response (EMR) last year, as part of the First Responders programme of the Jamaica National Building Society (JNBS) Foundation.
The programme equipped residents living in communities surrounding the St Ann leg of the North Coast Highway with the skills to provide effective emergency medical care at the scene of road crashes. The main objective is to reduce loss of life, lessen pain and suffering and promote the optimal recovery of victims.
Marlon acknowledged that while fire fighters received basic first aid and CPR training as a part of their job, “the training provided in the First Responder programme was more in depth and specific to motor vehicle crashes and medical emergencies.”

Marlon cautiously left his daughter with a fellow passenger and headed for the crash scene, where upon arrival, he observed that two trucks had collided head-on, and three persons were trapped in the vehicles, while one person was laying on the roadway.

“One person was unconscious, he wasn’t responding to anything, neither sound nor touch,” Marlon said, noting that, “just the fact that I seemed to know what I was doing, the people gathered allowed me to take charge of the scene.”

His training now fully engaged, Marlon assessed the scene and delegated responsibilities to persons in order to help.
“I later recognised that an Emergency Medical Technician (EMT) was on the scene and although he was a trained EMT, he allowed me to manage the scene,” Marlon said.
“One man had an injury to his head and I didn’t have anything to help with his wound. I got the cleanest thing I could find, which was a towel and applied pressure to the wound before moving on to another victim, who was aware, but was in initial shock,” he explained.

Due to Marlon’s quick action, the scene was secured by the time the Police and Fire service arrived and the lives of two of the victims in the crash were saved.
“In the end, I gave the best I could provide, which was to help to save two lives,” he added.

Tyrone Llewellyn, District Officer with the Jamaica Fire Brigade, who responded to the crash, commended Marlon for his positive actions that made the job of the emergency response teams much easier, due to his organization of the scene.

“When I arrived, he provided information about the casualties, who were present, those who were sent to the hospital, the severity of their injuries and the damage to the vehicles,” Mr Llewellyn said.

Mr Llewellyn also noted that Marlon’s post-crash care activities were effective in preventing further injuries to the victims in the aftermath of the crash.

“That assisted us, because in cases such as this one, patient handling is important to ensure that we prevent further injury. What he did on the scene made our job easier in terms of knowing what we had to do,” the district officer stated.

Saffrey Brown, general manager of the JN Foundation, says Marlon’s quick actions and application of his First Responder training was the outcome anticipated when the training programme was established.
“Marlon demonstrated alertness and responsiveness to an emergency situation, which we hoped our trainees would deliver when the programme was created, because more lives could be saved, if first responder care was more readily available,” she said.
Miss Brown also acknowledges that the training has heightened awareness of other volunteers who have seen opportunities where they could assist persons who were involved in crashes.
“We have had other volunteers who have arrived on crash scenes and based on their training, were able to assess and determine the kind of assistance to provide; as well as, provide detailed information to the emergency services about the crash,” Miss Brown explained.
The First Responders project is part of the JN Foundation’s Road Safety programme in partnership with St. John Ambulance, the FIA Road Safety Grant Programme and the Jamaica Automobile Association (JAA). It is designed to improve the behaviour of road users, and enhance post-crash care, two of the pillars established under the United Nation’s Global Plan for the Decade of Action for Road Safety 2011-2020 as a framework for improving global road safety.