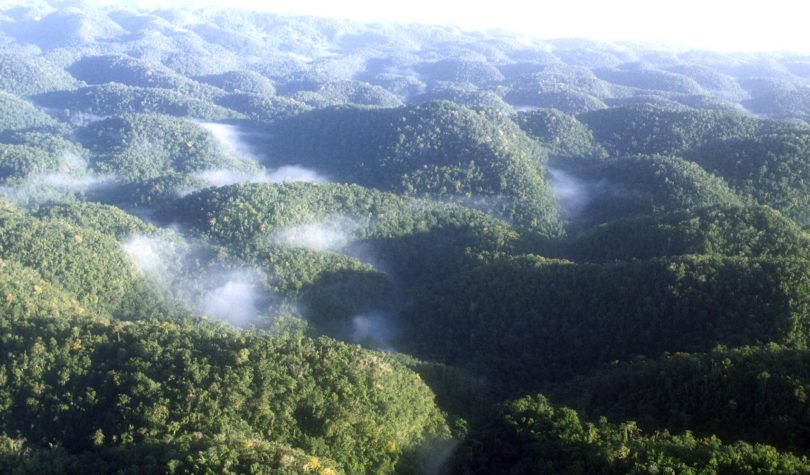 Cockpit Country is a rugged, forested area of west-central Jamaica, rich in plants, animals, water and history. It is home to about 70,000 people, including the Leeward Maroons of Jamaica. The wet limestone forest of Cockpit Country is Jamaica’s largest remaining natural forest and a refuge for rare native species. Plans to mine for bauxite and quarry for limestone threaten this important area, which has sparked a major campaign to ‘Save Cockpit Country’.

Cockpit Country supplies critical fresh water for Jamaica, estimated at 40% of the water needs of six western parishes, and 40% of all Jamaica’s underground water resources. This clean water is generated and accumulated by the forests of Cockpit Country. The water then soaks down into rivers, sinkholes, caves and the aquifer deep underground. A list of all the rivers, streams, upwellings, springs, ponds and glades that rise or flow out of Cockpit Country runs to almost 40, including the Great River, Martha Brae, YS River, Black River and Rio Bueno in the east (arising in Litchfield Mountain/Matheson’s Run).

Extensive consultations with the communities of Cockpit Country in 2013 as part of a boundary study done by the University of the West Indies showed that the people of Cockpit Country wanted it declared a protected area, ecotourism site, national park and World Heritage Site. They were strongly opposed to bauxite mining and limestone quarrying in Cockpit Country.

3. COCKPIT COUNTRY IS HISTORY AND CULTURE

Cockpit Country is a vibrant cultural, historical and symbolic site. This is where the Maroons fought the British to a treaty in 1738/9 and Cockpit Country remains a symbol of resistance and triumph for all Jamaicans. The Leeward Maroons still live in Cockpit Country and their culture is an essential aspect of Jamaican heritage.

An extraordinary diversity of native plants and animals are found in Cockpit Country. Many are found in Jamaica and nowhere else in the world, and some are found only in Cockpit Country, so they are of global importance. New species are still being discovered and the potential value, such as the options for new drugs, have hardly been explored by scientists.

The land, forests, plants and animals in Cockpit Country provide us with clean air to breathe, cooler temperatures, fresh water collected and stored, pollination and pest control for agriculture, medicinal plants and fertile soil in the valleys. The forests of Cockpit Country also help to buffer the impacts of climate change.

Article by Diana McCaulay for the Cockpit Country Stakeholders Group