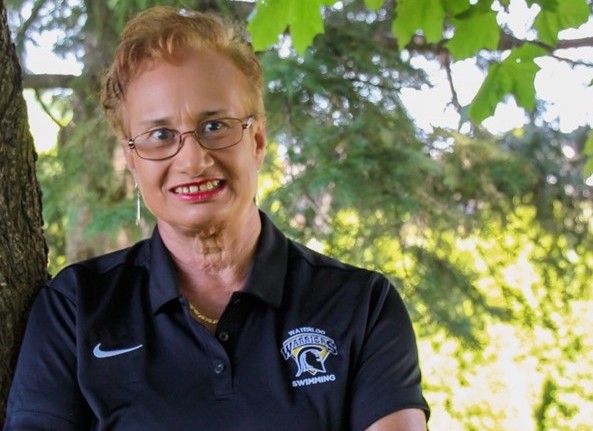 Jacky Beckford-Henriques, former head coach of Jamaica’s National swim program, has been listed among the Top 100 Most Powerful Women in Canada by the Women’s Executive Network (WXN). The women on the list are chosen by the WXN Diversity Council of Canada from among women in private, public, and nonprofit sectors. Beckford-Henriques was one of five employees of the University of Waterloo to receive the award.

Beckford-Henriques has served as the head coach of the Warriors Swim Program at the University of Waterloo since 2017. During her time as head coach for the Jamaican National team, Beckford-Henriques coached at the Olympic Games in 2000, 2004, and 2008. She coached the Jamaican National team for 19 years, designing and implementing the swim team program for Jamaica. She worked with Alia Atkinson, the current holder of the world record in 100-meter breaststroke during the Olympics and served as the team leader/coach for the Jamaican team at the 2016 World Short Course Championships. She received the “Coach of the Year” title from Ontario University Athletics (OUA) for the men’s team in 2019.

Beckford-Henriques is a co-founder of The Alliance, an anti-racism group at the University of Waterloo that seeks to educate members of the community about equity, diversity, and inclusion. She is a member of the University’s Black, Biracial, and Indigenous committee, which works to create inclusion and eliminate racism in university sports in Ontario. She is currently developing a template for a free Learn-to-Swim program for the Black, Indigenous, People of Color (BIPOC) community in Waterloo and hopes ultimately to transfer the template to other universities and sports where barriers exist for this community.

Beckford-Henriques has been described as an outstanding role model throughout the athletics program at Waterloo, including her work in creating equity and inclusion. The Department of Athletics and Recreation expressed pride in having her as a member of its team and being recognized for her leadership with the award.

Beckford-Henriques said she was surprised to receive the award and expressed her thanks to the WXN and the University of Waterloo for supporting her in leading the Warriors’ swim program. She also congratulated “all of the other powerful women” who received the award.

Beckford-Henriques is married to Nigel Henriques, an Associate Director of Systems in the Department of Advancement and has three sons. She and her English Cocker Spaniel and German Shepherd also participate in dog shows.