A Guide to Roadside Eating In Negril, Jamaica - Jamaicans.com 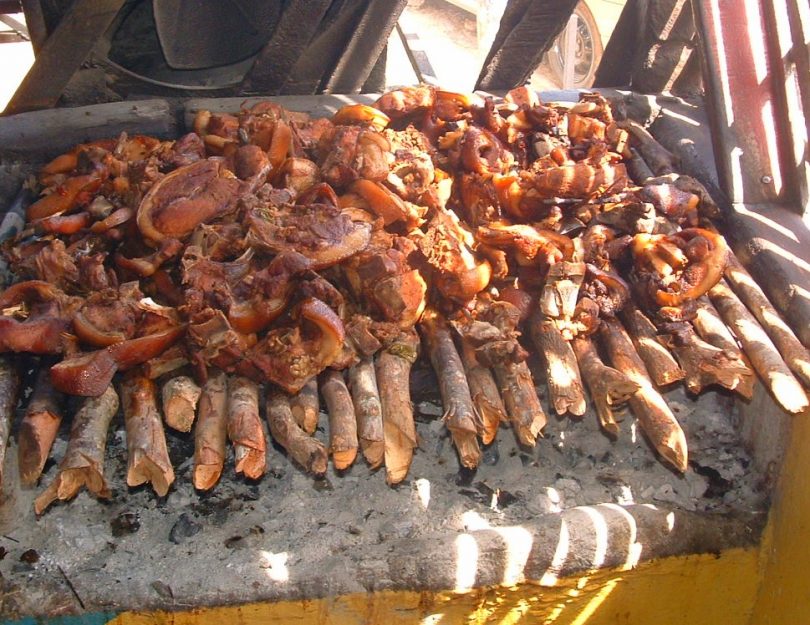 I have been living in Negril, Jamaica for 13 years now. I have eaten in just about every restaurant and foodery in this little town. My favorite spots are the roadside eateries because many of them are every bit as good and some are better than some of the best restaurants in the town.

Most tourists are not familiar with a lot of these spots but if you go out looking you will find some unbelievable foodie grade eatings. Here goes:

The Little Dumpling Shoppe.
This truly local spot is located in ‘Dumpling Shop Lane’ between the 2 plazas in the center of Negril. There is an OMG (Devon House) Ice Cream shoppe on the corner. Up in the lane any night after 8 PM you will find some of Negril’s locals hanging out and watching Action movies while eating their special brand of dumplings, tea, fried whole or sliced fish, callaloo, ackee and saltfish, saltfish fritters, fried chicken, egg sandwiches, and even cooked food. They have a good selection of tea, instant coffee and sodas, as well as beers and shots of rum. You can usually feast on a plate for around $300 to $600 Jamaican dollars and leave with a very satisfied feeling. The dumpling shoppe is open all night and caters to locals and tourists alike. The food is fresh and delicious and a great value! Ask for Mark or Shorty the owners.

Zaro’s Nite Kitchen
Zaro has been cooking his menu and frying his brand of ‘spinners’ dumplings for many years in Negril Square. He locates his rolling night kitchen in the square in front of the Scotia Bank across the road from Burger King. His menu includes fresh hot fried chicken, saltfish and macaroni, vegetarian chunks, vegetarian stew, steamed veggies, and rice and peas. He sometimes has other items but these are his staples. You can eat at Zaro’s for about $300 – $500 J and his clientele say his food is some of the best in Negril. Good fresh food cooked by a veteran roadside chef in Negril.

Steam Roast Fish and Conch with Water Crackers
There are a couple of different places to get this delicacy in town. In the lane between the value Master and the Scotia Bank, At the Taxi Park, at a small roadside counter next to the church at Firestation road. Even at the Corner Bar. They all serve this gourmet dish with steamed spiced water crackers and ocra. Some are spicier than others but they are all delicious…It is a special taste sensation. The conch or fish is seasoned with garlic, pepper, scotch bonnet, scallion, etc, and a touch of butter, then wrapped in foil and steam roasted in a flat pan with water over an open fire or coal pot. The resulting dish is served with soft water crackers and is a special Jamaican dish that most tourists don’t get a chance to taste…Yum!! Very reasonable at $300 – 500 for a serving depending on where you go. The fish are cooked the same way but usually they are stuffed with callaloo and seasonings along with the ocra. The fish are usually sold by size and range in price from $400 – 1200. Also served with seasoned steamed water crackers YUM!!

King Dust Jerk Chicken Conch and Jerk Pork.
King Dust is located on the Beach Road across the road from Rooms, Negril. His Conch Soup is amazing ( I think the best in Negril) His roast pork is sold by the pound ( My GF says she has never had better) He steam roasts his fish and conch and His Jerk Chicken is always Fresh and Juicy. Dust and I are friends but I mention his carts because Everyone who eats from his place raves about it and I do also…His steam Roast Conch and fish is really amazing! Dust Takes time and puts extra love in his cooking and it shows!

Power’s Corn Soup
On late night Thursdays, Fridays, and Saturdays you can get a vegetarian delight called Power’s Corn Soup. Power boils fresh corn in a large tall pot with seasonings and grains and yam, peanut and green banana and other ingredients and makes it into a unique vegetable ‘Sip’ (rasta for veg soup). It is delicious and really spicey and filling, especially with a hot boiled corn that makes the broth of the soup. Look for Power outside of The jungle, Outside of Alfred’s, outside of Scrub a Dub or outside of the venue at any big show happening in Negril. He is usually there late at night when people are leaving the clubs.

Step A Side Chicken
Since I wrote this article…Marshall has passed away, however there are plenty of other great Jerk Chicken vendors all around Negril, many of them are famous and popular and have great chicken….I will leave this part of the article in place in deference to my friend Marshall…AKA Step A Side

Marshall is a Jerk Chicken landmark in Negril. Look across from Roots Bamboo most nights of the week. Many people say his chicken is the best..Compare for yourself…I don’t eat chicken so I cannot render and opinion.

D. Brown’s Paradise
D. Brown’s is another version of the Jamaican Snack Bar. D. Brown is located a little out of town across from the Texaco Station. He usually has nice reggae playing in the yard next to the kitchen and on Friday nights has live music once in a while. Similar menu to the Little Dumpling Shoppe but with some unique differences. D Brown serves Fried Sliced Barracuda. Some Jamaicans say it is the sweetest fish in the sea. Others wont eat it because it is known to sometimes be poisonous and can make some people sick. I eat it all the time and have never gotten sick from it but D Brown makes it fresh every night and it is great…He also serves Macaroni and Saltfish and ackee and saltfish as well as callaloo and small fried whole escovietched fish with peppers and onions. His fried dumplings and fritters are smaller than the dumpling shoppe but they are also lower priced. The dumplings are best when they are hot… His shop serves tea and coffee, beer, rum, and sodas. D Brown is open into the night and some nights til morning light.

Early Bird Roadside Cook Stand
Once or twice a month , sometimes more often, I have breakfast out on the road at an amazing little roadside stand called Early Bird…It is located in the heart of Whitehall, close to the Texaco Station, on Lily Crescent.

Early Bird is open from 4:00 AM til around 10:00 AM most days. The food is cooked by a Jamaican master chef and it is unbelievably reasonable for what you get….The menu changes a little each day but here is a list of what you can expect to choose from:

Everything is cooked fresh and served hot or warm…The dumplings are incredible!

Prices for a meal range from $150 for a large porridge and 5 hot dumplings to $200 – $350 for a food container with any of the items above and a few dollars more for a combo.

Some people might be leery about going into the back street areas of Negril’s Ghetto area for a meal but if you are looking for really good food at a fair price and Jamaican culture with friendly locals walking past on their way to work, or coming home at sunup after the club then Early Bird is highly Recommended…You won’t be disappointed…

Owen’s Soup Cart.
Owen has a very large unique Soup Cart on wheels and is usually parked in front of the plaza near OMG Ice Cream. He makes his own unique soup recipes. His Vegetarian Red Peas soup is one of the best I have ever eaten but he doesn’t make it too often…His conch soup is also really special when he makes it. His more often staples lately are Chicken Foot, Cow Skin, Chicken Soup. He tells me he gets more sales for these from the locals. I only eat his Conch soup and his veggie soup. His soup is different than the others in Negril because he thickens the broth by cooking down his grain for the whole day before he adds the main ingredient. His soup is hearty and thick and really fills you up….He sells his soup for $100 to $350 J depending on the size. He also makes Hot porridge Usually plantain and peanut porridge but sometimes hominy corn and other types. His porridge is made with coconut not condensed milk. It isn’t too sweet and it is excellent!! Try it out some time!!

There are so many great food vendors in Negril. These are some of the best from my experience after many years of eating roadside cuisine. You may have some that you have tried and would like to add your opinion on….

I hope you enjoyed reading my article and I hope you will support Negril’s great food entrepreneurs. They work tirelessly to feed Negril’s tourists and local residents…

About the Author
Steve Weinstein has been living in Negril, Jamaica since April of 2003. He came to Jamaica to operate Jah Freedom Recording Company in Negril…after 5 years he built and is operating Jah Freedom Inn, Negril on Westland Mountain, West End, close to the Town square. He is passionate about making his guests enjoy the real Negril, Jamaica experience. His shares his extensive knowledge of the island, the culture and the lifestyle with anyone he meets.