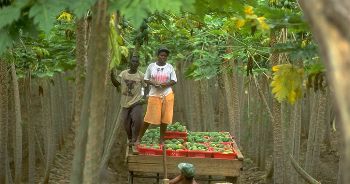 The Arawak Indians, early residents who arrived from South America around 650 AD, named the island Xaymaca or “land of wood and water.” They lived peacefully on the land and the sea’s bounty.

Jamaica, the Caribbean’s third-largest island, was visited by Christopher Columbus in 1494 on his second voyage to the New World. When the Spanish arrived later, they were welcomed by the Arawaks, inventors of the hammock. In return, the Indians were executed or taken as slaves. The only thing that remains of this race the name they gave to the island.

IN SEARCH OF THE PAST

In 1692, an earthquake struck the city of Port Royal, located on a peninsula near Kingston, and the entire city was lost to the sea. Today, efforts are underway to recover artifacts of what had been termed “the richest, wickedest city in Christendom.”

The Spanish lost the island in 1655 to the English. Soon, slavery increased as sugar became a booming industry. During these years, the English tried to tame an area of the island in the Blue Mountains that they nicknamed “the land of look behind.” In this little-traveled region of Jamaica’s interior, soldiers feared attack by the Maroons, descendants of slaves who had escaped from the Spanish. Soldiers always rode two to a horse, one looking forward and one backward, in order to protect themselves. In 1739, the British gave the Maroons autonomy, and even today they retain a separateness from Jamaican authority.

In 1834, slavery was abolished, but the the sugar industry continued. Later it was joined by the banana industry, and at the turn of the century visitors began to arrive aboard those banana boats. The tourism business grew to become Jamaica’s most important form of income.

After the abolition of slavery, Jamaica’s plantation owners looked for another source of labor. From 1838 to 1917, over 30,000 Indians immigrated to Jamaica, followed by about 5,000 Asians from 1860 to 1893 who came as indentured laborers. They were also joined by immigrants from the Middle East, primarily what is now Lebanon (although, in Jamaica, these residents are known as “Syrians.”)

Jamaica has been an independent nation since 1962.

1494: Columbus made his first visit to Jamaica

1509: The first Spanish colony is established in Jamaica in what is now St. Ann’s Bay.

1598: The Spanish governor proposes a separate area for the Arawak Indian population, which was quickly diminishing due to disease and hard labor conditions. The proposal fails.

1655: British troops invade and take over Jamaica. No Arawaks remain alive on the island.

1656: British colonists settle at Port Morant; most die from disease.

1834: Slavery brought to an end. For four years after this event, slaves had to work without pay.

1835: Small groups of Germans arrive in Jamaica in Seaford Town.

1860-1893: Large migration of Chinese into Jamaica as indentured workers.

1980: Elections result in hundreds of deaths in violent protests across island.