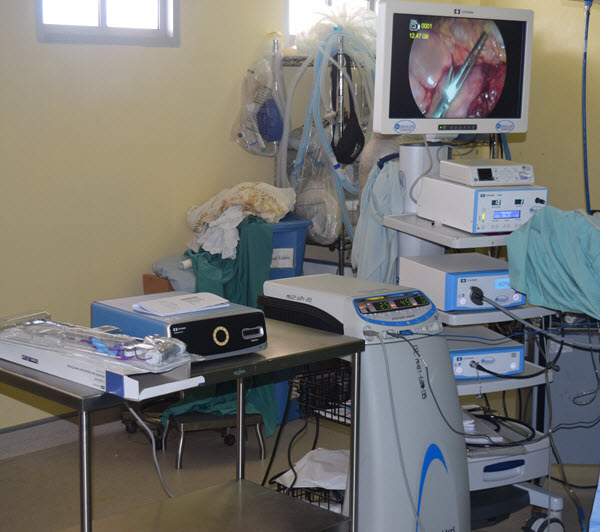 As part of its strategic plan to continuously improve the delivery of quality health care to patients and to also leverage resources, the Southern Regional Health Authority(SRHA) is improving access to laparoscopic surgeries to residents in central Jamaica.

With the advances in surgical principles and techniques, laparoscopic surgery is now the standard of care and is now being offered at the Mandeville Regional and Percy Junor Hospitals (PJH) in Manchester, following the acquisition of two state of the art high definition laparoscopic towers, valued at $17.8 million.

Senior Medical Officer (SMO) for the Mandeville Regional Hospital (MRH), Dr. Everton McIntosh explained that laparoscopic surgery, also called minimally invasive surgery is a modern surgical technique in which operations in the abdomen are performed through small incisions, rather than the larger incisions needed in open surgery.

For Regional Director of the SRHA, Mr. Michael Bent, the benefits of laparoscopic surgery are enormous for patients and the healthcare system.

“This is a regional focus as we have planned that by the first quarter of next year all the hospitals within the region which covers Clarendon, Manchester and St. Elizabeth will be offering these services. It is part of our retooling plan as we aim to utilize whatever technology to offer more efficient and effective healthcare” Mr. Bent said.

The Regional Director pointed out that the acquisition of the laparoscopic towers was funded with fees collected through individual health insurance which is a means of assisting public health care facilities to achieve their development goals. He added that the Authority has been able to purchase several assets, including two ambulances which were converted from buses, a surgical microscope, an anaesthetic machine and an ultra sound machine, over the last 15 months.

For SMO at the Percy Junor Hospital, Dr. Carlos Wilson, the hospital is pleased to be providing this type of surgery, which he noted is the standard for many operations including gallbladder removal.

“In less than two weeks since acquiring the laparoscopic tower, we have successfully performed three gallbladder removal surgeries. At present, patients spend three days in hospital, but with laparoscopic surgery we may soon be able to have patients come in, do the operation and go home the same day without being admitted. The recovery time and complications for patients are also much less with laparoscopic surgery” Dr. Wilson said.

Dr. Wilson added that a Laparoscopic Colorectal Surgery Workshop will be conducted at the PJH on September 22, 2017, noting that it is the hospital’s intention to do various laparoscopic surgeries in the near future.

Meanwhile, Dr. McIntosh pointed out that the acquisition of the laparoscopic equipment will enable surgeons operating at MRH to “now practice what they have been trained to do and be better able to adhere to modern standards of surgical care. This will greatly benefit our patients as well as greatly enhance the prestige and reputation of the hospital as an institution where quality care is standard.”