Here are media "clips" from two interviews with Archbishop Abuna Yesehaq on Bob Marley's Christian baptism before his death. 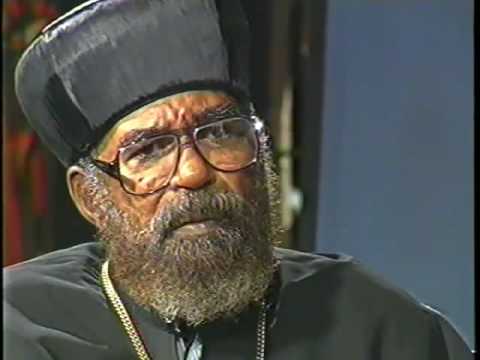 Below are “quotes” from two interviews with Archbishop Abuna Yesehaq on Bob Marley’s Baptism that appeared in the Jamaican Media.

Gleaner Interview
In a newspaper interview with Archbishop Abuna Yesehaq done by Barbara Blake Hannah,November 25, 1984, in the Gleaner’s Sunday Magazine (pages 2,3,11), titled ‘Abuna Yesehaq Looks Back on 14 Years of Ministry in Jamaica’ the following was said about Bob Marley’s baptism.

“Bob was really a good brother, a child of God, regardless of how people
looked at him. He had a desire to be baptised long ago, but there were
people close to him who controlled him and who were aligned to a different
aspect of Rastafari . But he came to Church regularly. I remember once while
I was conducting the Mass, I looked at Bob and tears were streaming down his face…When he toured Los Angeles and New York and England, he preached the Orthodox faith, and many members in those cities came to the Church because of Bob. Many people think he was baptised because he
knew he was dying, but that is not so…he did it when there was no longer
any pressure on him, and when he was baptised, he hugged his family and wept, they all wept together for about half an hour.” (This section below is from p. 11.)

JBCTV Interview
In an Interview the following year (9th July, 1995) on the JBCTV (now called TVJ) program “Profile” he was asked by host Ian Boyne about the bapistim of Bob Marley. Below is a clip from that interview

Ian: You baptized Bob Marley?
Yesehaq: I did baptize Bob Marley in the presence of his wife Rita Marley and his children. Only the family, because he was not so willing to have it officially, it was difficult for him…which I don’t want to describe.