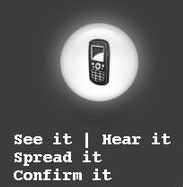 This week we interview the Founder of On the Ground News Reports, one of the many alternative news sources that started during the Dudus extradition incident in Tivoli. Within days of launching a Facebook page they have amassed over 10,000 followers. Today they have over 25, 000 followers. In today’s 24-hour news cycle they are providing information before the traditional news sources.

Q: Why have you chosen to withhold your name?
The nature of the service is such that we have received criticism from the Government and others.  They have complained that we break news too fast.  We have also received many warnings and threats, so for safety reasons we keep our identities secret for now.

Q: How did you come up with the idea for “On the Ground News Reports”?
In the days leading up to the ‘invasion’ of Tivoli Gardens in Kingston I found that information was not forthcoming from the government or mainstream media entities, and people in Jamaica learned more from rumors than anything else.  When I realized that most of the rumors turned out to be true, I realized that what was needed was a medium where those who knew the truth could interact with those who heard rumors and those interested in the truth.  The truth was out there, and only by interacting could we get to it as fast as possible.  It worked.  We were able to cover the happenings almost instantaneously, posting updates every few seconds.

Q: How would you describe On the Ground News Reports?
We are a news service that consists of over 24,000 reporters and several editors who see and hear almost everything that happens in Jamaica.  We break news as it happens and because we are everywhere, we can follow stories before mainstream news agencies are able to deploy their reporters.

Q: When your fan page amassed over 10,000 Facebook in less than 3 days what went through your mind?
Frankly I was surprised.  I did not expect such a surge.  But it demonstrated that people were hungry for details and information, and nowhere else was providing it.

Q: Did you expect to have an impact on being an information source?
That was our goal, to be the best- the fastest and most accurate news source on happenings in Jamaica.  It was when Daryl Vaz, the Information Minister, mentioned us indirectly in a press briefing and then went on to state that the Government would respond by establishing a press centre that we realized the impact we were having.  This was also the first time we realized that we could be catalysts for change in Jamaica- the government realized that they had to start giving more information- or we would.

Q: How do you vet the information?
We have a system for labeling news- Unconfirmed, Unconfirmed but corroborated, and confirmed.  Briefly, ‘Confirmed’ reports have been confirmed by numerous reporters or by pictures/video footage, or by a trusted source on the ground.  We do post rumors and ‘stories’ that pass around as ‘Unconfirmed’, however, we find it very interesting that we have only had to declare one story posted as “Unconfirmed” as false.

Q: Were there any stories you heard from your on the ground sources that “tugged” at your heart and you could not publish?
No.  There are stories we did not post because of National Security reasons, or because they could be libelous.  That is where it gets difficult.  For example, we were informed about several raids before they took place, or about the deployment of troops on certain missions and we withheld the information until after the raids took place.

Q: The government blamed social media for what they call “rumors” about what was happening in Tivoli. What would your response be to them?
The government blamed OGNR indirectly…  We found it interesting that they missed the point.  We were responding to the demand people, their electorate, had for information.  They created a ‘Press Center’ and promised to give updates 3 times a day- which was wholly inadequate.  We appreciate that the government cannot give the detailed news reports we give without affecting their operations, but would have impressed upon them, given the opportunity, the importance of our service in a State of Emergency when people are nervous and eager for information.
We were very willing to post their news for them, but they instead attempted to reinvent the wheel and failed.

Q: Were you ever contacted by the government concerning OGNR?
Not directly. No.  We were contacted by the government concerning a forum on social media news they held in May in Montego Bay.  The Office of the Prime Minister thanked us for reposting their press release, despite our post being a bit critical of the nature of the forum… We found it strange at the time that a forum was being held on social media news and OGNR was not invited to participate.

Nevertheless, we would only have participated over the phone and not in person due to security reasons so it didnt matter much.  A few days later however they issued us an invite which we turned down.  We obtained footage of the event and it went well.

Q: Has any of the OGNR been impeded by government or police because of what you do?
Not directly.  We know that one of our members has been trailed and watched though.

Q: How about the mainstream media sources where you aggregate news from. Have they tried to impede your efforts?
They have taken news from us without crediting us as their source.  Apart from that, there is little interaction between us.

Q: If there is one thing you have learned from starting this news source what would that be?
The interplay between social responsibility and ethics and even personal security has been a painful experience at times.  I have learned how difficult it can be to have to choose between satisfying the demand for news, and balancing the ethical responsibility to family members of the deceased for example.  We obtained pictures of the deceased very early and spent hours agonizing over whether to censor them, whether to post them at all, whether they could possibly bring harm to us as editors, etc.
In the end we had to make some major policy decisions, and we posted them censored on our page and provided the photographs uncensored elsewhere.

Q: The fans on OGNR are very passionate about Jamaica and what is going on. Do you think your medium can influence Jamaica policy?
Definitely, though we will never take sides politically and make every effort not to give our personal opinions.  We know that information can drive change, and once people are made aware of the truth they can be inspired to be more involved.  The Diaspora has been especially energized by the service, and we have just as many members from overseas as locally.  Many persons encouraged us to turn the page into a new independent political party- that may not be a good idea, but it showed us that people expected us to be a medium for change in Jamaica.

Q: Do you have an opinion on the Dudus extradition incident?
I do, and I may be targeted for it.  All I will say now is that it is quite ironic that our Government’s deception has given birth to a long awaited offensive against organized crime in Jamaica.  I only hope that all the criminals are targeted- not only the ‘businessmen’ but the politicians as well.

Q: What can we expect from OTGNR moving forward?
The service will be overhauled and expanded.  Our new website and Facebook/Cell phone apps will allow for increased functionality and make the news easier to follow.  We hope to make it more interactive as well, linking maps, images, videos to news items.  One thing we have always needed is a way to sort through news, so you can see only news from a particular event, area, type of incident, etc.  That is coming as well.  You may have seen our new features such as “Paleface On the Ground” and the “Yaadinfo Podcast” which have received great reviews and we are excited about.  We also want to get involved in investigative journalism; the kind that can topple corrupt regimes, corporations, or get us killed lol.

Q: Thanks for the interview. Any closing thoughts?
Thank you for following OGNR and we look forward to serving Jamaicans everywhere.