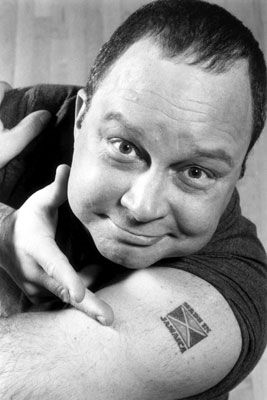 “Tony Hendriks is Jamaican born & half bred; his comedy has a Caribbean flavour and an international perspective but his appeal is universal. He’s Jamaica’s greatest export since Ganja and he makes you laugh even more!”

No! I did not come up with that witty assessment of one of Jamaica’s funniest men. I wish I had, but that is the opener to Tony’s biography. It goes on to say:

“Tony Hendriks got the most laughs. His fast paced routine hardly gave you time to catch a breath.” THE VOICE, London.

“Amazingly funny, extremely entertaining. His well animated facial expressions back up stories of his childhood in Jamaica”. CLOCKWORKCOMEDY.COM

In the footsteps of ‘Desmond’ and ‘Chef’, Tony ‘Paleface’ Hendriks, no ‘c’ is set to take British television by storm, and if his career in Jamaica was anything to go by, 2005 should see another Jamaican actor on the British small screen.

Paleface might sound familiar to you as a term heard on old cowboy/Indian shows…you know where the Indian refers to the white settlers as ‘paleface’. Well there is a similar reason why Tony has that moniker. Yep! He is a very fairskinned Jamaican. As he says in his own words:

MY SKIN COLOUR IS PART OF MY STOCK IN TRADE. IT’S A GREAT STORY. THE MAJORITY OF AUDIENCES HAVE NO IDEA HOW ETHNICALLY DIVERSE JAMAICA IS.

SO YES, MY SKIN COLOUR IS INTERTWINED IN MY COMEDY BUT HUMOUR IS A DEFENCE MECHANISM TO COVER A MULTITUDE OF SINS.

I FIND THAT IDENTITY IS MORE IMPORTANT THAN MY COLOUR. EVERYONE, INCLUDING JAMAICANS, WILL ASK AT SOME STAGE: “WHERE YOU BORN IN JAMAICA?”, IF YOU’RE WHITE OR AS IN MY CASE, WHITE-ISH.

WHEN I ARRIVED IN ENGLAND AGED ELEVEN, MY NEW CLASSMATES WERE PERPLEXED AS TO MY ORIGINS. THEY NEEDED TO DEFINE AND PIGEON HOLE ME. I DESCRIBED MY BROWN SKINNED FATHER, DARK SKINNED GRANDFATHER AND RED HAIRED, BLUE EYED, FRECKLED, ENGLISH MOTHER.. ONE GUY CHIRPED IN: “YOU’RE A WOG!” I HAD NO IDEA WHAT A DEROGATORY TERM THIS WAS BUT FIGURED I’D FOUND AN IDENTITY AND SAID, “YEAH, THAT’S RIGHT I AM.”

OF COURSE WHEN I CAME BACK TO JAMAICA I GOT THE NICKNAME ‘PALEFACE’. AT SOME STAGE I’M GOING TO WRITE A STORY ABOUT “PALEFACE & WOGGY”.

STONY HILL WAS WHERE I WAS BROUGHT UP, TOP OF BARTON AERIE TO BE EXACT. I’D LOVE TO RETURN THERE ONE DAY.

RACISM AND BIGOTRY ARE AN UNFORTUNATE PART OF HUMAN NATURE. IN MY EXPERIENCE THOUGH BLACK PEOPLE’S RACISM IS A LOT LESS VIOLENT THAN WHITE PEOPLE’S. IF YOU GO TO THE DANCEHALL AND PEOPLE SCREAM “BUN DE WHITE MAN!” YOU’LL STILL SEE WHITE MEN AND WOMEN IN THE AUDIENCE GOING “BLOW, BLOW!” YOU WON’T SEE ANY BLACK PEOPLE AT A KU KLUX KLAN MEETING.

See what I mean about this fellow named Tony Hendriks ( no ‘c’). Let me backtrack and give u an overview of his accomplishments to date.

Tony was voted “Best Jamaican Comedian” 1999 and 2000 after becoming a household name in Jamaica mainly due to five seasons of the hit TV show “PALEFACE POINT OF VIEW” which aired on CVM TV.

Since moving to England he has won a CRE – RACE IN MEDIA AWARD for his work as co-host on the show “I LOVE CARNIVAL” in 2002 on BBC Radio London.

He has just recorded an episode of the BBC One sitcom THE CROUCHES to be aired in early 2005.

His multi character, one-man play “BRIXTON ROAD PORTRAITS” toured successfully in 2003/2004 and sold out at every night at The Bullion Room, Hackney Empire.

He wrote, produced and starred in the award winning revue “LAUGH JAMAICA” which sold out every show for over 100 shows in Jamaica and did the same when it toured the USA 2001 and UK in 2002. The video has been played on all Air Jamaica’s transatlantic flights can now be seen on free digital channel ACTV.

Tony won the ITI Best Actor Award for his work in Derek Walcott’s “Pantomime”, Best Supporting Actor for Edgar White’s “I, Marcus Garvey”. He has appeared in films such as: “The Lunatic” – Island, and “Going to Extremes” – Lorimar. His TV credits include being recognized as ‘that white bloke who talks Jamaican’ on SKY TV’s “CARIBBEAN UNCOVERED” and “BRAIN CANDY” on BBC THREE.

He headlines Caribbean shows all over the USA, UK, Europe and Caribbean including many corporate functions and he thrills and educates audiences at Jongleurs, Glee Clubs, Rawhide, Mirth Control, Off The Kerb, Frog & Bucket, Laughter House, The Stand – Edinburgh & Glasgow, universities all over the UK and too many other gigs to mention.

By now you should be shaking your head and saying, ‘yes I know who this is’, and the memories should bring a smile to your face. He makes people laugh and has for a long time. So when did he have an inkling to this talent.

I WAS THREE WHEN I FIRST REALISED I’D CAUSED PEOPLE TO LAUGH. I CRIED. NOT BECAUSE I WAS ANGRY OR HURT BUT BECAUSE IT FELT SO RASS GOOD. ALL THE WOMEN CAME RUSHING UP AND HUGGED ME, CRUSHING ME INTO THEIR BOSOMS. “HOW COOL IS THAT?” I THOUGHT. “IT’S THE STAGE FOR ME!”

I LEFT JAMAICA WHEN I WAS ELEVEN AND WENT TO SCHOOL IN ENGLAND. ACTING WAS THE ONLY THING I WAS REALLY GOOD AT. WELL, IT WAS THE ONLY THING ‘LEGAL’ THAT I WAS GOOD AT. SO MY MOTHER WAS HAPPY FOR ME TO DO IT. BUT INSTEAD OF GOING TO DRAMA COLLEGE WHEN I LEFT SCHOOL I JOINED A BAND AND TOURED EUROPE. I PLAYED THE DRUMS.

MY DAD WAS A GREGARIOUS MAN WHO TOLD GREAT JOKES, HE WAS ALSO ON TV AND RADIO, MY UNCLE WAS A POET AND BROADCASTER, MY AUNT HAD A BRIEF CAREER AS AN OPERA SINGER, MY SISTER PLAYS PIANO AND FLUTE, MY BELOVED

GRANDFATHER WAS THE BEST STORYTELLER EVER, SO IT WAS NO BIG SURPRISE THAT I WOULD END UP AS DOING PRETTY MUCH ALL OF THE ABOVE IN MY OWN WAY.

I’VE WON AWARDS FOR MY ACTING, BROADCASTING AND PLAYS. I’M AN ACTOR, WRITER AND COMEDIAN. STAND UP COMEDY IS ONE OF THE PLACES WHERE I ACT MY WRITING. IT’S A LIVING.

Q Why did you go to school in England?..

MY PARENTS SEPARATED. MOM WAS ENGLISH SO RUNNING BACK HOME TO HER MOTHER REQUIRED A WOOL JUMPER, A RAINCOAT AND A TRIP ON A BANANA BOAT.

Q. Are you now based in the UK? What’s up with that?

THE POUND IS SO STRONG JAMAICANS IN ENGLAND GO OUT IN THE RAIN!

SERIOUSLY, AFTER 65 EPISODE AND FIVE SEASONS OF “PALEFACE POINT OF VIEW” ON TV, “LAUGH JAMAICA” ON STAGE AND VIDEO AND LOTS OF STAND UP TO LOCAL AUDIENCES AND TOURISTS IN HOTELS, I WANTED A NEW CHALLENGE.

THE UK IS THE CENTRE OF STAND UP COMEDY IN THE WORLD RIGHT NOW. IT HAS THE HOTTEST CIRCUIT AND COMICS FROM ALL OVER THE WORLD COME HERE TO WORK. IF YOU WANT TO PLAY WITH THE BIG BOYS YOU’VE GOT TO COME TO THE BIG ARENA. I’M BETTER BECAUSE I’M HERE.

THERE WILL ALWAYS BE WRITERS AND PURVEYORS OF ALL LEVELS OF THEATRE. HIGH BROW AND LOW BROW. THE PERCENTAGES OF EACH USUALLY CORRELATE TO THE SIZE OF THE AUDIENCES FOR EACH AND THE LEVELS OF EXPOSURE AND EDUCATION AVAILABLE TO TEACH THE WRITERS.

Q While we are on that subject, do you see the future of the theatre as ongoing, growing? Just as you continued in the line of Bim and Bam, Mass Ran etc, whom do you see as taking on what you have built on?

CHRIS (JOHNNY) DALEY RECENTLY HOSTED A GROUP OF COMEDIANS FROM THE UK AND USA TO DO SHOWS IN JAMAICA. HE’S THE NEXT GENERATION OF COMIC, ACTOR, PRODUCER.. THEN AGAIN MOST POLITICIANS ARE USUALLY PRETTY HILARIOUS.

Q I see where you will be on a TV-show which will air in 2005, which leads me to wonder if you desire to bring another Caribbean flavoured sitcom (is that the term used over there) along the lines of “Desmond’ and “Chef”, to British television? Do you remember those two shows?

Q Do you think that Britain is long overdue for another series aimed at the Caribbean community? That talk show featuring that East Indian…( he provides the name of show )

…family has proved successful, so where is the one representing the other large ethnic group in the country?

IT IS UP TO US TO PRODUCE IT. THERE IS TOO MUCH TALK BUT NOT ENOUGH ACTION ON BOTH THE ESTABLISHMENT AND OUR OWN PART.

Q Do you see yourself as the one doing it, whatever form ‘it’ may turn out to take.?

YES. MY GOAL IS AND HAS ALWAYS BEEN TO GET A SUCCESSFUL TV SHOW THEN LEVERAGE MORE WORK IN AND ABOUT JAMAICA. I’M WORKING ON IT.

Q As a matter of fact, would you attempt a show like that, combining your comedic flair with the interviewing style?

NEVER SAY NEVER ALTHOUGH ITS NOT MY FIRST CHOICE.

Q What is your take on Jamaican TV…the state of local programming? It occurs to me that it must say something that you have gone abroad to find an outlet for your talents and energy. Could you not find support and outlet in Jamaica?

SUFFERING FOR MY ART IN JAMAICA WASN’T GOING TO BUY ME A HOUSE. I BOUGHT ONE IN THE UK WITHIN THREE YEARS. OH, AND A CRISSAS!

TO BE HONEST I FOUND FAR MORE INSPIRATION IN JAMAICA BUT A LOT LESS FOOD ON THE TABLE.

Q We pride ourselves in the supposed continual call for ‘things Jamaican’ but does this stop at the arts or is it that dance can be ‘homegrown’ but not TV?

IN JAMAICA WE ALWAYS WANT AND EXPECT WORLD CLASS PRODUCT FROM HOME. UNFORTUNATELY IT’S NOT SO EASY.

THE DISCREPANCY BETWEEN WHAT WE SEE AND WHAT WE GET IS DUE TO A LACK OF PRICE TAGS ON USA TV SHOWS, SO PEOPLE FORGET OR DON’T REALISE HOW MUCH IT COSTS TO WRITE AND SHOOT A HALF HOUR SITCOM.

Q Is Royal Palm, ( I may be wrong about the name of that show), is that an exception and not an example of the direction our local programming wants to go.

TV PRODUCERS HAVE TO BE CREATIVE IN MAKING PROGRAMS, THE WORLD OVER, WITHIN THE SPONSORS BUDGET. THAT’S WHY ROYAL PALM HAD PRODUCTS PLACED IN ALL THEIR SHOWS. BEER HERE, CELL PHONE THERE, RAT POISON OVER HERE, ETC.

Q Sponsors spend a lot of money on music shows so why not on local TV programming?

What is your take on the lack of outlet for such an immense talent like yourself?

THE ENTERTAINMENT BUSINESS IS SELF-PERPETUATING. IF YOU DON’T PICK YOURSELF UP AND DO IT FOR YOURSELF NOTHING WILL HAPPEN FOR YOU. IF YOU WANT IT, DO IT! I WENT TO HOTELS, THEATRES, PRODUCERS, KNOCKED ON DOORS AND AUDITIONED UNTIL THEY GAVE ME GIGS. I GOT MYSELF ON CVM TV. I GOT THE TALENT TOGETHER, WROTE AND PRODUCED “LAUGH JAMAICA”. I TOOK MYSELF TO ENGLAND AND FOUND WORK. IT’S ALL A GAMBLE. SOMETIMES IT PAYS OFF. OBVIOUSLY YOU HAVE TO HAVE TALENT BUT YOU ALSO HAVE TO WORK REALLY HARD. WHAT’S THE OLD SAYING? “10% INSPIRATION, 90% PERSPIRATION.”

GOVERNMENTS OR THE PRIVATE SECTOR RARELY DEEMS THE ARTS IMPORTANT.

IF YOU WAIT FOR GOVERNMENTS AND GRANTS, YOU’LL STARVE. EVEN IF YOU GET THEM THEY SELDOM HELP PEOPLE MAKE GOOD DECISIONS AND THEY END UP PRODUCING SHIT. NO BOTTOM LINE MEANS, NO PRESSURE. PRESSURE IS GOOD FOR MAKING GOOD BUSINESS CHOICES.

THE CHALLENGE IS ALWAYS FOR PRODUCERS TO PRODUCE A BALANCE BETWEEN GOOD ART AND COMMERCIAL WORKS.

It was something else to interact with this incredibly talented Jamaican. Here’s hoping he continues to enjoy success in Britain so that he can fulfill his desire to return home and continue on. Visit with him at his homepage.. www.jamaicanpaleface.com