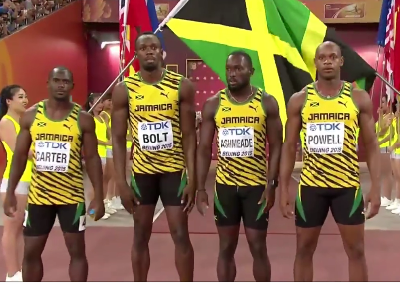 The pride of Jamaica was once again on display for the entire world as the men’s and women’s sprint relay teams captured gold on the penultimate day of competition at the 15th IAAF World Championships in Beijing.

The men’s team, featuring Usain Bolt, Nesta Carter, Asafa Powell and Nickel Ashmeade, took gold in a world leading 37.36 seconds at the Bird’s Nest. The US team finished in second place but were later disqualified and saw host country China taking silver in 38.01 with Canada winning bronze in 38.13. The result solidified Jamaica’s dominance of the sprint relay to a sixth straight major global championships, including the last two Olympics.

The women’s team, made up of Shelly-Ann Fraser-Pryce,Veronica Campbell-Brown, Natasha Morrison and Elaine Thompson, retained their 4×100 meters relay title when they crossed the finish line in a championship record 41.07 seconds. The US were runners up clocking 41.68 seconds while Caribbean neighbors Trinidad and Tobago took third place in 42.03.

“The performance of our athletes at the IAAF World Championships in Athletics continues to amaze and inspire us as a nation,” said the Honourable Wykeham McNeill, Minister of Tourism and Entertainment. “Congratulations to the men and women who have represented us with great pride and distinction to close the championships with 11 medals and 2nd place in the medal tally. We believe this serves as a precursor of what’s to come as Team Jamaica readies itself for the global stage at next year’s Summer Olympics in Rio de Janeiro.”

Jamaica’s Director of Tourism Paul Pennicook looks forward to Rio de Janeiro next year. “Our athletes have proven their dominance on the track and we are beaming with pride as we begin planning for Jamaica House Rio. We are elated to celebrate alongside the rest of Jamaica,” noted Mr. Pennicook.

The Championships culminate tomorrow with the finals of the 4×400 and will see Jamaica looking to increase its medal tally.