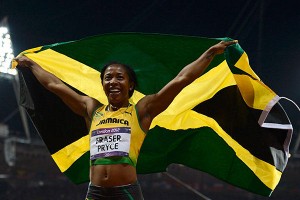 The ‘Pocket Rocket’, Fraser-Pryce, is now the first three-time world champion in the women’s 100 meters thanks to her exciting win at the IAAF World Championships in Beijing. Fraser-Pryce, beat out the Netherland’s Dafne Schippers, who came in second and the United States’ Tori Bowie, who came in third. The two-time Olympic gold medalist’s winning time of 10.76 seconds comes a day after fellow Jamaican sprinter Usain Bolt’s victory in the men’s 100m race.

“We are delighted to celebrate with the ‘Pocket Rocket’, Shelly-Ann Fraser-Pryce, on her emphatic win in the 100m at the 15th IAAF World Championships in Beijing,” said the Honourable Wykeham McNeill, Minister of Tourism and Entertainment. “Shelly-Ann is in a class by herself, clinching her third individual World Championship win by retaining her 100m title. Jamaicans at home and abroad are beaming with pride today!”

Jamaica’s Director of Tourism Paul Pennicook has high praises for Fraser-Pryce. “Shelly-Ann has had a remarkable career and her win in the 100m concretizes her dominance on the track. She has worked hard this year and we are excited to celebrate her golden run,” noted Mr. Pennicook.