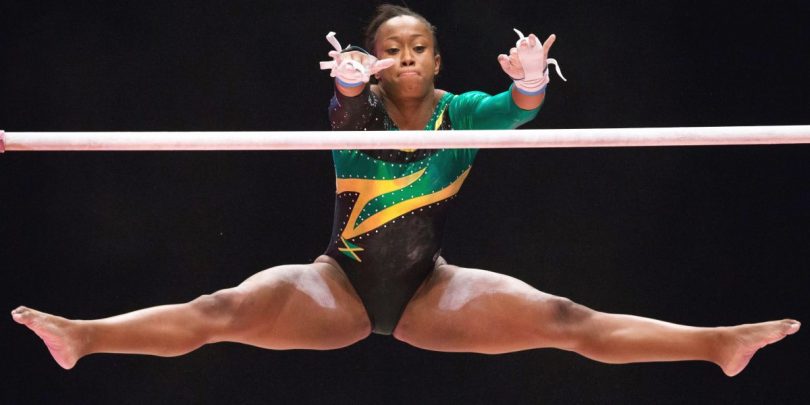 The Jamaican-American was born in Maryland, but represents Jamaica as part of its national gymnastics team. Williams’ parents are from Jamaica and she’s the niece of Anthony Hylton, who served as Jamaican Minister of Foreign Affairs and Minister of Mining and Energy. She has three sisters – Maya, Kristine and Zitafa. Maya is also a gymnast on the Jamaican National Team.

The 22-year-old Williams attends the University of California, Berkeley and is the most decorated gymnast in the school’s history. She’s a member of the Golden Bears gymnastic team there, earning second team All-American honors in the all-around. She’s only the fifth in the school’s history to achieve that honor, making her the most decorated gymnast in Cal history.

The 2018 NCAA All-American win is even more impressive, considering she’s returning after an Achilles injury that required surgery. During the 2018 Championships, Williams finished 7th in semifinal II with a 39.4250 for a 13th place overall win, topping her former 39.225 and surpassing her former 20th place finish in the 2015 NCAA Championships.

Williams joined the Jamaican national gymnastics team in 2010. She was the State and Regional Champion in 2011, competing the same year at the World Artistic Gymnastics Championships in Japan. She was crowned State Champion again in 2012 and represented Jamaica in Antwerp, Belgium during the 2013 World Championships.

She has six NACGC/W Regular-Season All-American wins; was twice named regional Gymnast of the Year; selected All-Pac-12 seven times; has a Pac-12 floor championship; won the NCAA Regional Vault Championship; and took 2015 Pac-12 Freshman of the Year honors. During her Level 10 career in 2014, she was State Champion for the fourth time.