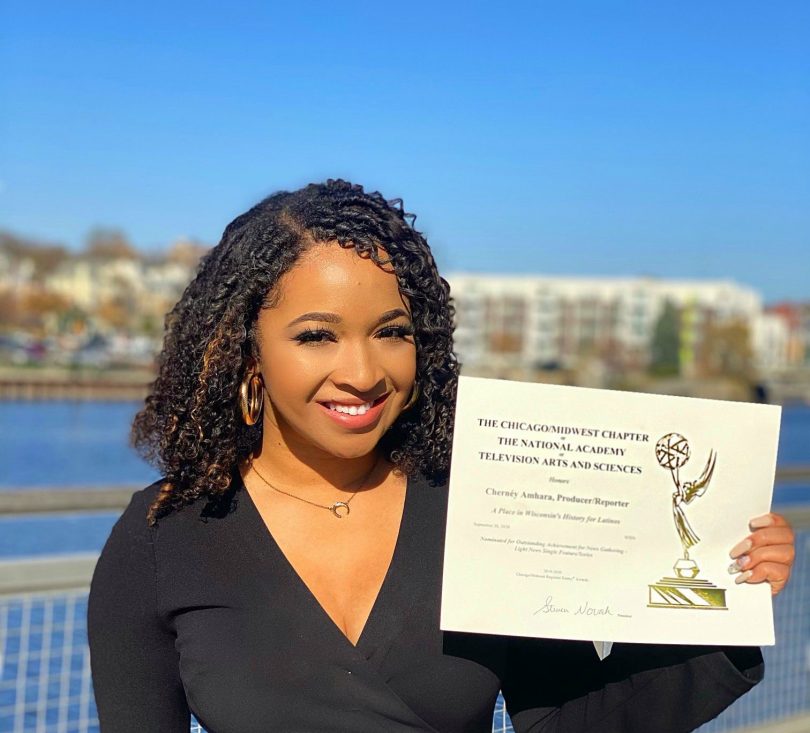 Chernéy Amhara, whose parents are both from Jamaica, has been nominated for an Emmy Award by the Chicago Chapter of the National Academy of Television Arts & Sciences for her work as producer and reporter on the series “A Place in Wisconsin’s History for Latinos,” which was broadcast on WISN. The series was nominated in the category of 2019-2020 Outstanding Achievement for News Gathering-Light News Feature/Series. The Emmys will be presented at the 62nd Chicago/Midwest Emmy Awards in a virtual ceremony in November.

Amhara lived in Jamaica until the age of six and attended Ardenne Prep School in Kingston before moving to the United States, where she spent her high school years in Sacramento, California, and later earned a BA in Journalism from California State University, Northridge. She realized that she wanted to pursue a career in journalism when she took an elective class in radio at college. She interned with CBS Radio in Sacramento and then moved to Los Angeles to take advantage of the career opportunities offered by the bigger news market.

She credits her Jamaican grandmother for inspiring her to work hard. Her grandmother moved to the US from Jamaica after her husband died and helped Amhara’s parents raise their children. Amhara told an interviewer that “She always made sure we knew where we came from and were proud Jamaicans, no matter where life took us. She sacrificed a lot to help my brother and I succeed, and I will always be grateful. Everything I do is in her honor.”

Amhara worked first as a reporter at CBS19 News in Charlottesville, Virginia, and in 2017, Amhara joined the FOX5 team in Las Vegas. While in Las Vegas, Amhara covered the mass shooting at the Mandalay Bay hotel. She currently works at WISN in Milwaukee, Wisconsin. Amhara was presented with the Michelle Clark Fellow Award in 2016 by the Radio Television Digital New Association. She is a member of the National Association of Hispanic Journalists and Alpha Kappa Alpha Sorority, Inc.

Commenting on her Emmy nomination, Amhara posted to social media, “Honored to receive an Emmy nomination from the Chicago chapter of the National Academy of Television Arts & Sciences for my series titled, “A Place in Wisconsin’s History for Latinos.” Worked collaboratively with photojournalist Hector Godinez on this project!” Amhara won her first Emmy in 2018 for the story “Sin in the City?” a special report on gangs in Las Vegas that was inspired by the murder of her brother Marcus.