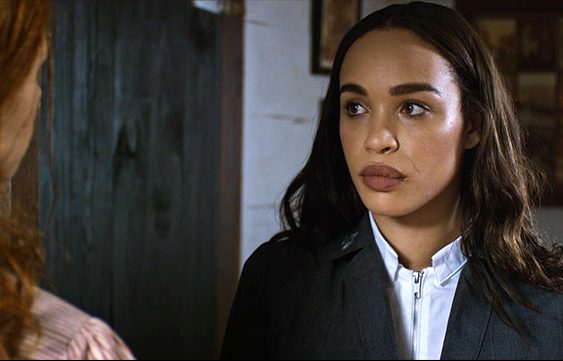 The upcoming sci-fi film about killer drones, aptly named “Hover” and starring Jamaican-Australian actress, Cleopatra Coleman, will be released in select theaters beginning June 29, 2018. The release by SYFY Films will be available via VOD and digital HD on July 3, 2018.

Directed by Matt Osterman, Coleman also wrote the screenplay that brings to life a dystopian future in which AI drones operated by the U.S. Department of Defense are being used to kill anyone who discovers the reason farmland residents are sickening. Coleman and co-star Shane Coffee (John) are healthcare workers who help those individuals end their lives compassionately. “Hover” brings to life the film’s tagline “Fear What Flies.”

Best known for her role of Erica in the TV comedy “The Last Man on Earth,” Coleman’s many talents come as no surprise. Her mother was a costume designer, belly dancer and entrepreneur from Jamaica. Her father was of Scottish descent and was a musician, writer and director.

She grew up on the coast of Australia and discovered the thrill of performing at the tender age of four through ballet, moving on to dance competitions and becoming a finalist in the National Dance Championships. She began modeling at 14, landing her first national commercial and movie role the same year.

Coleman was a regular on Showtime’s “White Famous. She had recurring roles in teen dramas, Australian soap operas and crime dramas, and performed with the Red Stitch Theatre Company. She’s played numerous roles in U.S. productions in genres ranging from music videos to horror films and the 3D dance movie, “Step Up: Revolution.”

No stranger to international fame, Coleman’s upcoming film “Hover” is another facet of her acting and writing talents. Movie-goers don’t have to be sci-fi fans to enjoy “Hover.” Drones are filling a variety of roles in today’s world, from capturing news events to law enforcement. “Hover” takes the concept a step further in a future world where everyone learns to “Fear What Flies.”