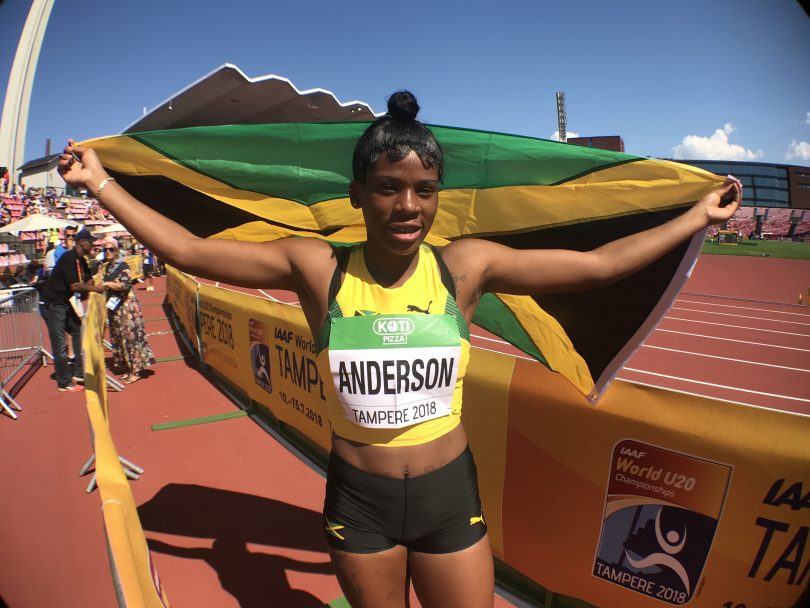 Jamaica’s World Under-20 silver medalist Britany Anderson has broken the junior world record – twice – in the women’s 100-meter hurdles event at the Motonet Grand Prix meet in Joensuu, Finland. On July 24, 2019, Anderson. 18, finished with a time of 12.71 seconds to surpass the 12.84 seconds set by Aliuska Lopez of Cuba in 1987. Anderson’s time was also 0.01 seconds faster than that of Annimari Korte who set a new Finnish record with 12.72 seconds. The time run by Anderson in the 100-meter event also set a new national junior record by beating Rushelle Burton, who ran the distance in 12.87 seconds in July 2016. Anderson was the 2017 World U18 champion, as well as a silver medalist at the World U20 in the summer of 2018. She came to the tournament in eastern Finland with a personal best time of 13.01 set at the IAAF World U20 Championships in Tampere, Finland. Anderson skipped the ISSA Boys and Girls Championships in Jamaica in March 2019 but has been training and competing at meets in Europe in the current season.