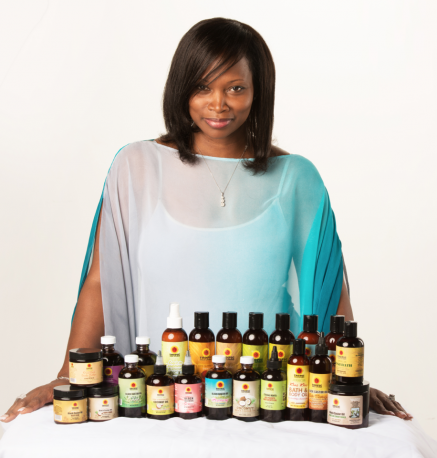 The Talk of the Town focuses on life in Atlanta, Georgia, providing features on the people, places, and events of interest in the area. In a recent feature, Talk of the Town related the story of Jamaican Lois Hines, the co-founder of Tropic Isle Living.

Twenty-five years ago, Lois Hines and her husband Michael began providing Tropic Isle Living’s Jamaican Black Castor Oil. Since then the product has garnered a dedicated following, with the business really taking off when the natural hair movement was popularized via social media. As more women of color chose natural hair styles, the all-purpose castor oil became “the hottest thing on the hair market,” said Hines. But just as the couple was enjoying the new popularity of the company, Michael Hines, then 50, received a diagnosis pf brain cancer. Doctors told him he hand only three months to live. Michael stretched that time to one-and-a-half years before he died in 2016, and during that time, Lois Hines was inspired to continue building the company, even though “It was the worst time of my life.”

Lois and Michael met when she was 16 and he was a 20-year-old student at the University of Georgia. By the time Lois was 18 she had moved to New York, and Michael followed shortly after. Lois had grown up in Jamaica, and Michael had always loved Jamaican culture and Caribbean food, both of which were difficult to find in New York City in the 1980s. He then met his mentor, Brother Rashan Abdul Hakeem, who had Maroon heritage. According to Lois, love for and pride in Jamaican culture was rekindled through this relationship. “It was amazing and it felt right. In that environment, I remembered what my grandmother was teaching me,” she said.

As a child, Lois often accompanied her grandmother Ansa, who lived in Marley Hill in South Manchester, Jamaica, as she picked herbs and sang religious songs. Grandmother Ansa had deep African roots and introduced Lois to a natural way of living. Although she enjoyed spending time with Ansa, Lois said she wasn’t always a believer in the natural remedies. “When you are a child you think your granny is crazy but I loved spending time down there because I had a love for the land and for her,” she said.

The couple was encouraged to start their own business by Brother Rashan, and in 1992, Tropic Isle was born with the goal of making the therapeutic benefits of Jamaican black castor oil to health food stores in the United States. Castor oil made from seeds of the Castor tree is used in Jamaica to treat many ailments, include constipation and skin problems.

Lois worked other jobs to support the business and the couple’s two children when they moved to Atlanta in 2005. When the recession hit, she started to work full-time with Tropic Isle. Lois and Michael continued their original business plan for years until someone mentioned on social media that their Jamaican black castor oil was very helpful in managing natural hair, increasing their business exponentially. They bought more farms in Jamaica to increase their oil supply and began buying from other organic farms as well. Even with enhanced production and shipping, they had a hard time fulfilling orders. Never did they consider changing the integrity of the oil. “If you want the good stuff, you have to wait,” Hines says.

The oil is still the center of Tropic Isle Living, but Hines is moving forward on plans to expand the company into a lifestyle brand offering new products like shampoos, conditioners, and pomades. It will also respond to customer demands for scrubs and butters. A lifestyle publication, podcast and clothing line are also in the works. In 2016, the firm moved into a facility for manufacturing and storage that is twice the size of its previous space. And while the US is the largest market for the company’s products, it is also doing business in Dubai, Nigeria, Lagos, South Africa, the Netherlands, and Great Britain.