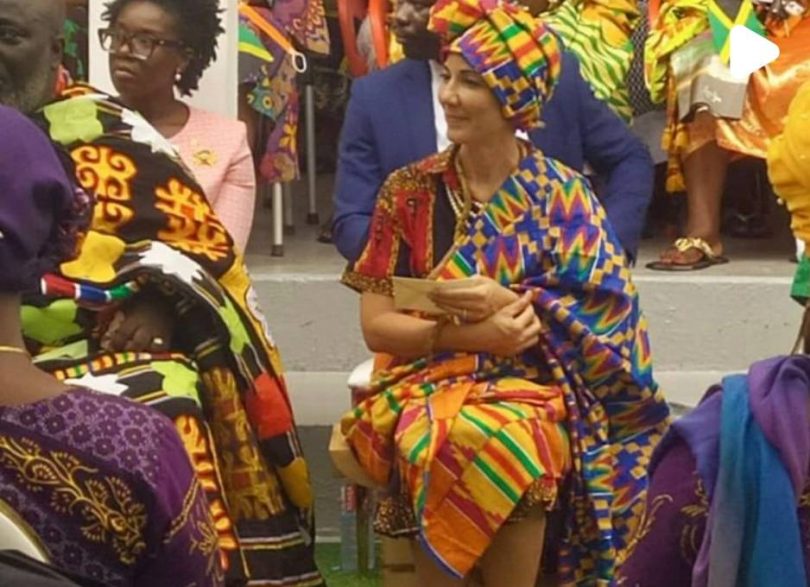 Kamina Johnson Smith, Jamaica’s Foreign Minister, was honored by Ghana’s Akropong Tribe with the title of “Tourism and Diaspora Queen” or “Otwiwa Asiedu.” Johnson Smith, who wore traditional Chanaian garb, received the naming certificate during a ceremony at the palace of Oseadeeyo Kwasi Akuffo III, who also welcome the Minister as “Akuapem Queen” in a tweet. Johnson Smith said she looks forward to facilitating more opportunities for Jamaicans to have exposure to their ancestral roots in Ghana and for Ghanaians to visit Jamaica for business, tourism, and cultural exchanges as well.

She also paid tribute to Jamaica’s National Heroine Queen Mother, Nanny of the Maroons, who has been named as a descendant of the Akuapem people in Ghana. Johnson Smith, who is looking for support for her effort to become the Secretary General of the Commonwealth, repeated her commitment to the Akuapem people and emphasized her goal of working with all the 54 states in the Commonwealth to change the organization so it benefits all of its citizens. 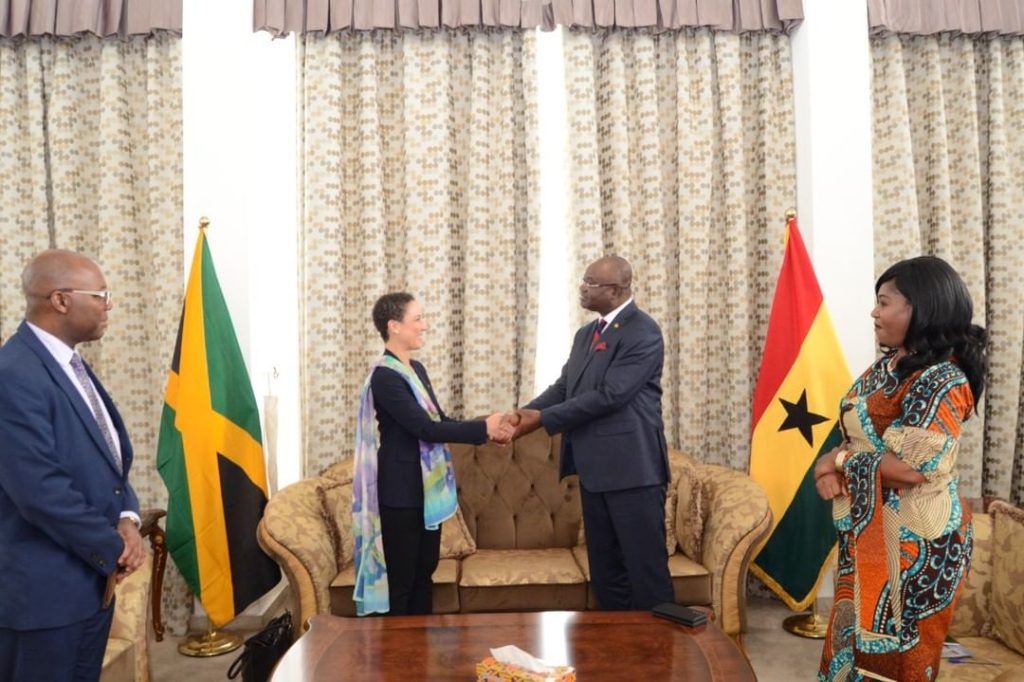 About Senator The Honourable, Kamina Johnson Smith
Senator the Honourable Kamina Johnson Smith is an Attorney-at-Law by profession, with approximately 15 years at the Jamaican Bar. In 2014 she opened her own law firm, after serving as Company Secretary and Head of Corporate Affairs and Projects (Legal) of Cable & Wireless Jamaica Limited.

On 7th March 2016, she received her appointment as the Minister of Foreign Affairs and Foreign Trade of Jamaica.

In December 2009, Minister Johnson Smith was appointed Government Senator and from January 2012, served as an Opposition Senator with the responsibility of Opposition Whip. She was also appointed the Spokesperson on Education and Youth in February 2015.

In addition to her portfolio responsibilities, the Minister has a keen interest in governance, education, youth and gender affairs, and has successfully tabled Parliamentary motions regarding public sector governance, reintegration of teen mothers in the formal school system, and the review of laws related to violence against women, children, the elderly and persons living with disabilities.

Senator Johnson Smith holds a Master of Laws in Commercial Law from the London School of Economics and Political Science, a Bachelor of Laws from the University of the West Indies, Cave Hill and a Bachelor of Arts in French and International Relations from the University of the West Indies, Mona. During her years at Cave Hill, the Minister also pursued courses in various aspects of Public and Private International Law. She also subsequently completed professional certificates, including areas such as Legal and Diplomatic French in Guadeloupe as well as Negotiation at the Harvard Law School Professional Programme in Boston, Massachusetts.

She is also a graduate of the Norman Manley Law School where she was Valedictorian, the recipient of awards in Legal Remedies and Advocacy and represented the School as Lead Advocate in mooting competitions in Trinidad and Tobago and Malaysia.

Being highly committed to public service and volunteerism, the Minister recently served as a member of the Advisory Board of the iLead Education Reform Project sponsored by the Jamaica National Foundation. She has successfully managed several philanthropic projects of the LIME Foundation, including international conferences on Children and Internet Safety and the establishment of a computer centre and training programme at the Athlone Wing of the Sir John Golding Rehabilitation Centre, a residential home for disadvantaged children living with physical disabilities. She served on the Corporate Governance Committee of the Private Sector Organization of Jamaica (PSOJ) for six (6) years and has also served as Director of the Factories Corporation of Jamaica and the Early Childhood Commission.

Minister Johnson Smith was born in St. Andrew, Jamaica, and is married. Her recreational activities include: sports, yoga, reading and dance.

The Minister believes passionately that Jamaica’s best days still lie ahead and is committed to playing her part in seeing them realized.