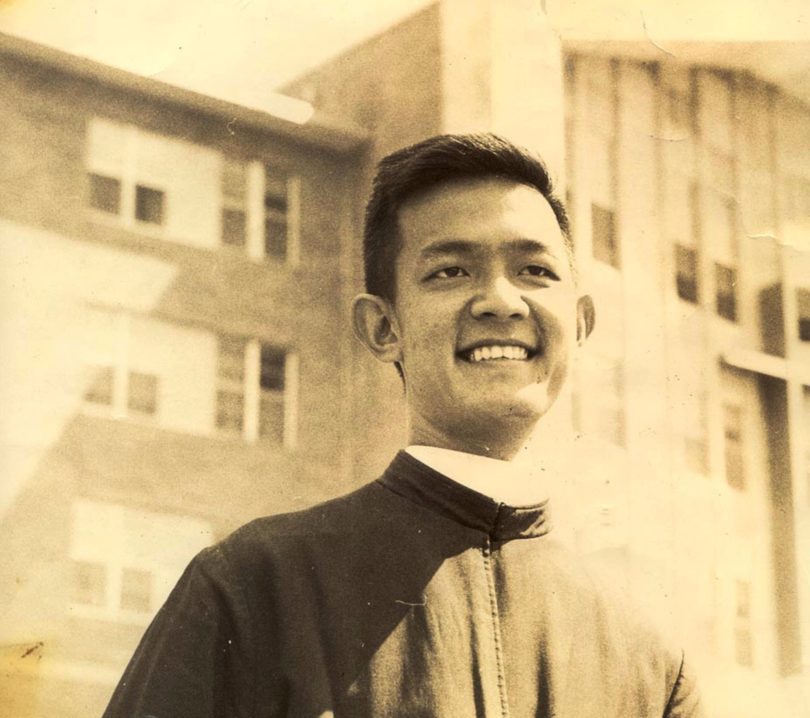 On September 17, 1939, Father Richard Ho Lung, the founder of the Missionaries of the Poor, an international Roman Catholic monastic order based in Kingston, Jamaica, was born on the island in Richmond, St Mary.

His parents were Chinese, and both were born in Hong Kong but traveled to Jamaica as immigrants. The family was very poor, and Fr. Ho Lung remembers how they passed around a single small cup of rice at dinner, sharing it among his parents, his two sisters, his brother, and himself.

He was educated first by the Franciscan sisters in Kingston, then by the Jesuits at St. George’s College. After finishing his studies there, he joined the Society of Jesus on August 15, 1959. Fr. Ho Lung was ordained to the priesthood on July 4, 1971. He then pursued a Master’s degrees in philosophy, English literature, and Theology. He also attained a Doctorate in Humanities. He went on to teach at St. George’s College, the University of the West Indies, and at Boston College in the United States.

During his work as an assistant parish priest at the Aquinas Center from 1972 to 1980, Fr. Ho Lung had a spiritual awakening, of which he said,“I felt that everything that I had done up until that time had been somehow hypocritical. I was preaching the Word of God but not really living it.” He felt a call to make a more radical response to the challenge presented by the Gospel, and remembering the desperate poverty he witnessed in Kingston, he felt that God was calling him to do something about their suffering.

After some initial reluctance, Fr. Ho Lung knew he had to take up the challenge and made a decision to leave the Society of Jesus and found a religious community of men who were dedicated to serving the destitute and rejected.

The Missionaries of the Poor is dedicated to “Joyful Service with Christ on the Cross” and serves the poorest of the poor. Since its establishment, Missionaries of the Poor has grown to include over 550 Brothers from 13 countries. Headquartered in Kingston, the Brothers maintain six mission homes for people in the most need, including abandoned sick, disabled, or dying men, women, infants, and children. They also have operations in India, the Philippines, Haiti, Uganda, Kenya, and in Monroe, North Carolina in the United States. A mission is being established in Indonesia.

In 1997, the Holy See recognized the Missionaries of the Poor as a religious community, and in 2014, the Vatican elevated the order to an Institute of Pontifical Right.

One of the most compelling elements of the work of the Missionaries of the Poor is their production of award-winning Caribbean-style Christian music. Most of their songs were written by Fr. Ho Lung and performed by the group Father Ho Lung & Friends. The money generated from their music provides revenue for the mission.

Fr. Ho Lung stepped down from his leadership role in 2014 and was succeeded by Brother Augusto Silot.

Information and Photo Source: Missionaries of the Poor