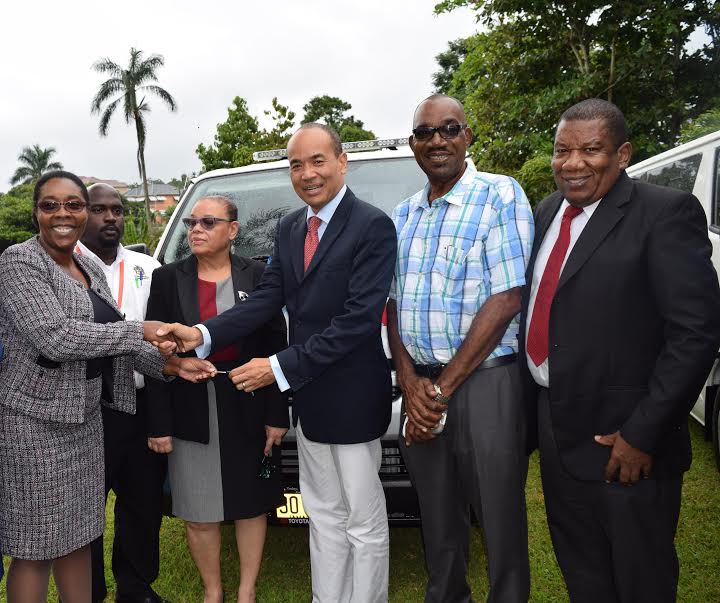 Describing the move as a Jamaican innovation, Chairman of the Southern Regional Health Authority (SRHA) Board, Mr. Wayne Chen lauded the SRHA for spearheading an initiative to convert and customize two buses into ambulances which has resulted in savings of $7.6 million.

Mr. Chen who was the keynote speaker at the handing over ceremony at the SRHA Regional Office in Manchester on Tuesday, October 11, noted the value and importance of being innovative in healthcare while leveraging scarce resources to offer better value and services to customers.

Regional Director of the SRHA, Mr. Michael Bent explained that two new ambulances values $22 million with a turnaround time of six months, however the initiative to covert and customize the buses resulted in a combined cost of $14.4 m, allowing savings of $7.6 m and also a shortened delivery time from 6 months to 2 months.

He pointed out that the customization was done without breaching or compromising the Government of Jamaica Procurement Guidelines and the international specifications for ambulances.

Mr. Bent explained that the unique features of the ambulances include among other things: replaced flooring which is easily sanitized and in keeping with infection control protocols, an elevated stretcher base to reduce the impact of the road on patients and a large oxygen cylinder safely stored under seat to enhance occupational health and safety standards.

Other features include a more comfortable nurse’s seat which allows for greater maneuvering of patients, a partition between the driver and patient compartments which minimizes cross contamination and also LED lamps which are very visible and distinct.