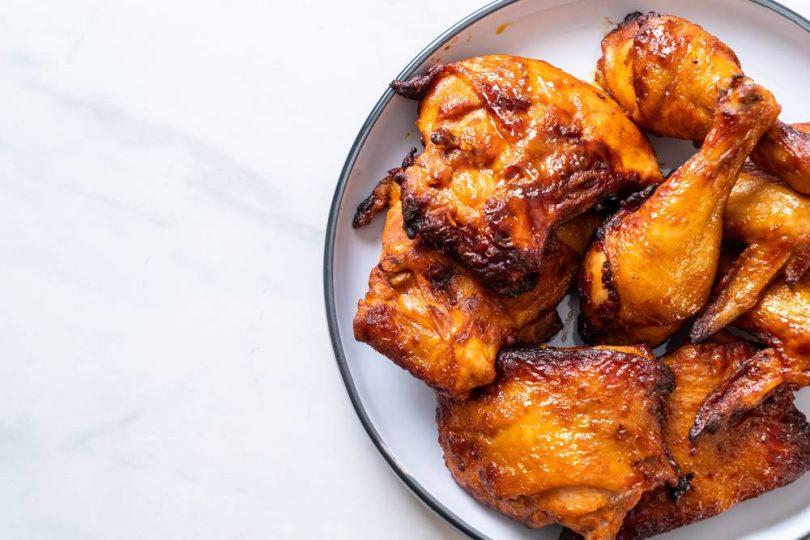 Jamaican jerk is ranked at Number 44 on the list of the 100 best dishes in the world by TasteAtlas, an online guide to traditional foods.  Founded in 2015 TasteAtlas collects authentic recipes, reviews, and research about dishes and ingredients around the world. TasteAtlas describes itself as “a world atlas of traditional dishes, local ingredients, and authentic restaurants. It claims to have collected almost 10,000 dishes, beverages, and ingredients and 9,000 restaurants worldwide.

According to TasteAtlas, Jamaican jerk traditionally refers to a pig that was grilled slowly over a fire made of pimento wood. The term “jerk” refers to the island’s method of cooking the meat over a fire pit or on a grill. While the contemporary version still uses pork as the main ingredient, the recipe has expanded to include chicken, seafood, vegetables, and even fruit.

The main ingredient in authentic jerk is its spicy and unique seasoning that blends onions, green onions, thyme, chilies, nutmeg, cinnamon, salt, and Jamaican allspice, which is known as pimento, to create its unique spicy, hot, and sweet flavor. The seasoning was originally used to prevent the meat from spoiling, and there are various theories about why the dish is called “jerk.” Some believe this is the word for dried meat in the language of the Incas, or it may come from the process that jerks the meat during the time it cooks over the open fire.

There are many jerk huts and shacks throughout Jamaica, and patrons of each tend to have a healthy competition with each other in attracting the most customers. The marinade and the slow cooking result in very tender meat. The dish is served on paper plates or wrapped in aluminum foil in the local jerk shacks, and it is traditional to eat it with your fingers. Jerk is often accompanied by something sweet to offset its spiciness, including bread, Jamaican beer, or a rum cocktail. While traditional jerk uses pork, jerk chicken has become the most popular variety among today’s diners.

TasteAtlas is not in competition with Tripadvisor or the Michelin guide but views its mission as filling a niche between gourmet cuisine and popular tourist haunts. Its rankings are based on reviews and recommendations from professionals in the food industry, rather than on the site’s users. It relies on 30 authors to perform research using available sources, such as mentions in articles, reviews, the popularity of searches on Google, and relevant certificates like European Union food schemes, UNESCO Intangible Cultural Heritage, and Ark of Taste.

The top five traditional foods worldwide as determined by TasteAtlas are, in order, Cochinita Pibil, a Mayan-influenced Mexican pork dish with its origin in the Yucatan; Picanha, a cut of beef popular in Brazil; Pierogi Ruskie from Red Ruthenia, a soft dumpling filled with potatoes and cheese; Massaman Curry, a mild, sweet, and unusual curry made with coconut milk and roasted spices; and Trofie al Pesto from Italy’s Liguria region, which combines hand-rolled pasta and the famous basil-and-garlic-pine-nut green sauce.