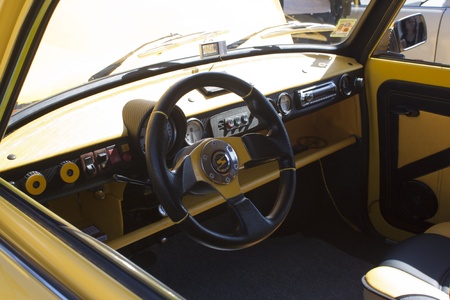 This is a true incident that happened in MoBay about a month ago. A man was hitchhiking on a very dark night in the middle of a storm. The storm was so strong that he could hardly see his feet in front of him. Suddenly a car stopped next to him. Without thinking, he got in and closed the door, just to realize that there was nobody behind the steering wheel.

The car moved slowly. He looked ahead and saw a curve in the road. Scared he started praying, begging for his life. He was terrified. Just before hitting the curve a hand appeared through the window and turned the steering wheel. The man, now paralyzed with fear, watched how the hand kept appearing every time they got to a curve. Gathering all his courage, he jumped out and ran to the nearest lights he could see. Wet and in shock, he went into a bar and asked for

Gathering all his courage, he jumped out and ran to the nearest lights he could see. Wet and in shock, he went into a bar and asked for a double whites. After drinking it, he told every one of the horrible experience he just had. Everyone was silent when they realized he was crying. A

bout half an hour later, two men came walking into the bar and, on seeing the terrified man, one said to the other:”Yow John nuh di ediat dat wha jump inna di car while wi did a push it”