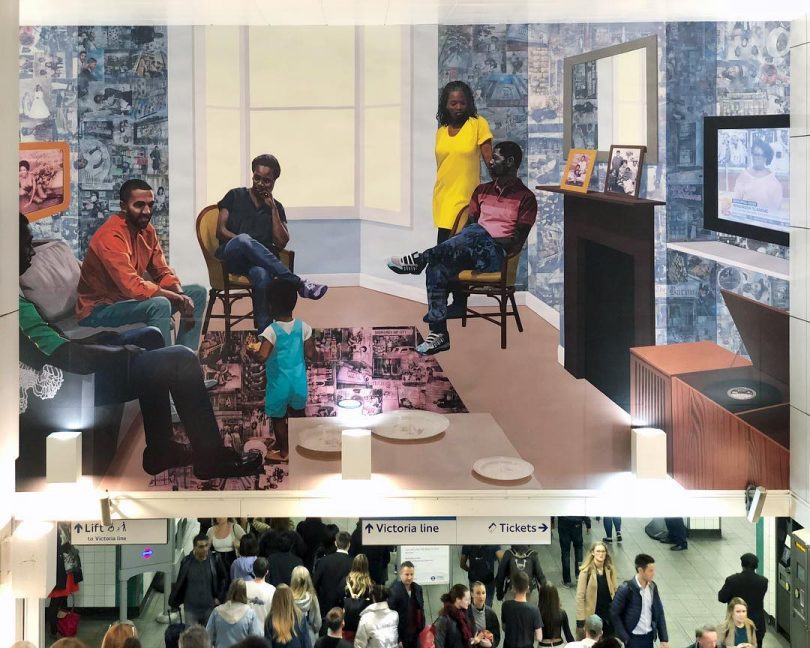 The Jamaican dub poet Linton Keswi Johnson is one of the people honored in the artwork “Remain, Thriving” at the Brixton subway station by artist Njideka Akunyill Crosby, which represents a portion of a new program inspired by murals created in the area in the 1980s.

Johnson, also known as LKJ, was born on August 24, 1952, in Jamaica, but he has lived in the United Kingdom for many years. In 2002, he became the only black poet and only the second living poet to be published in the Penguin Modern Classics series. His performance poetry features his recitation of his own verses in Jamaican Patois over the dub-reggae musical, usually written with Dennis Bovell, British producer and artist.

London is one of the most diverse cities on the planet and is home to over 800,000 British Jamaicans. Brixton is a multi-ethnic community located in south London that has become a center for many Jamaicans. Over time, the area has become the place where Jamaicans can find things that remind them of their home island, including spices, music, and culture. Brixton features clothing boutiques, record stores, and Jamaican restaurants, like the 24-hour jerk shack the Ultimate Jerk Center. The community street market in Brixton has had a major role in embracing the Caribbean culture of London and in 2010 was given heritage protection.

This new commission artwork represents Art on the Underground’s 2018 program featuring only female artists and is a part of #BehindEveryGreatCity – a Mayor of London campaign. In her work, the artist collected contemporary and archived images of Brixton, with background images reflected the patterned wall paper of a previous time. The photo collage images show social gatherings that reflect the history, community and politics in a manner similar to the original Brixton murals. Many of the locations shown in the images no longer exist, and indicate, as the Brixton murals so, the way the area has changed over just a few decades.

The work by Akunyill Crosby is also an exploration of her mixed cultural identity and combines her attachment to her home country of Nigeria and her current home in Los Angeles. “Remain, Thriving” was specially created for the entrance to the Brixton underground station and shows an imagined domestic scene: a gathering of grandchildren and great-grandchildren of the Windrush generation at home in Brixton.

In preparation for her work, the artist talked to local community members and to public historian Kelly Foster, the Black Cultural Archives, and the Lambeth Archives. Of her work, Akunyill Crosby said it was for people who grew up in Brixton. “I want the past to have a place in the present in this work: the work is very much about the present, but the past is so alive in it.” According to Eleanor Pinfield, the head of Art on the Underground, the new work is “deeply rooted” in Brixton, and the artist, through the depiction of a domestic scene imbued with references and memories of the local area, speaks to modern London while making past history alive within it.