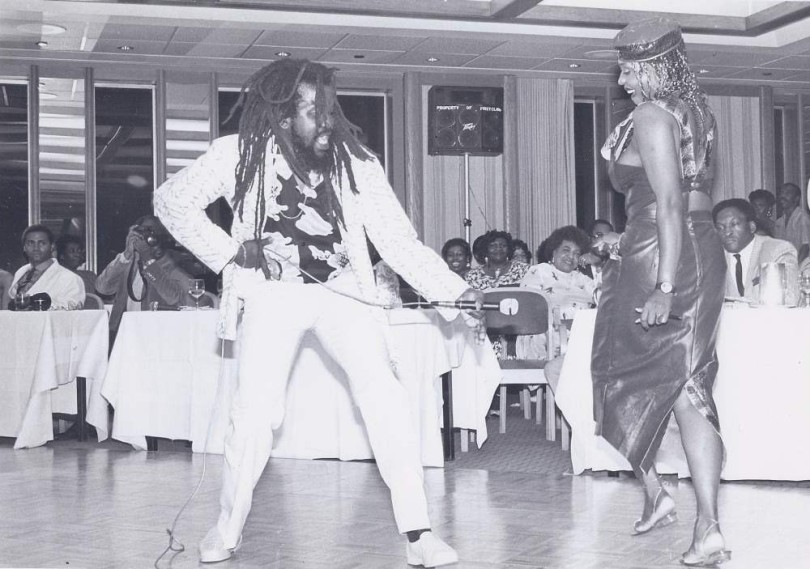 Jamaican producer Charley Simpson honored the legacy left by calypsonian Rootsman who died on Aug. 21 in Trinidad & Tobago by releasing “The Best of Rootsman” a CD which compiles 11 dance tracks that most identify the style and contribution of the legendary recording artist.

“It was a rush to get his music out there by Labor Day,” Simpson said, “his ‘Parkway’ song is actually the anthem for Brooklyn’s biggest fete and so we wanted to make sure his fans had something that honor his work.”

According to Simpson, since the passing of the entertainer born Yafeu Osei, foremost on his mind was a nagging thought about how to fully pay tribute to his friend Roostman.

Considering “the jollification he added to the Labor Day” party singing “we goin’ jam on the Parkway…with wi band on di Parkway…” the revelry could “not go on without Rootsman.”

Simpson said “Rootsman had not even been to New York when he recorded the party song.”

“He is a wonderful songwriter and after talking to people who attended the Labor Day events he wrote the song that became number one on the WLIB radio charts for weeks and weeks.”

Simpson is known in some circles as the original importer of the T&T pre-Lenten celebration to Jamaica.

He has often said that prior to Byron Lee launch of a Jamaica Carnival he shared his intentions with the popular bandleader. Simpson claims because of his lack of sponsorship, political affiliations and ready cash, Lee allegedly capitalized on his brainchild to introduce a carnival concept to the mostly-reggae populous.

Simpson in the late 80s forged a much smaller soca/calypso event in Jamaica, introducing the genre and pageantry to audiences in Portmore and downtown Kingston. Those carnivals were broadcasted on WLIB-AM, the then sole Caribbean outlet for news and information.

“Rootsy also recorded a song about Jamaica carnival but that song was never released,” Simpson added. He said is in possession of that track and will ensure its release.

In addition, he wrote songs about carnivals in Canada, St. Vincent and Belize.

On this latest project, he compiled popular tracks — “Soca in de Palace,” “Rack Me rack Me,” “Something Wonderful,” “Save We Culture,” “Allegations,” “Rocking All Night,” “Little Black Girl,”“Belizean Woman,” “Live Nice” and the alluring signature carnival song “Miami Vibes.”

Simpson said the last time he saw the singer, “he was in bad shape.”

“Last year carnival I went to Trinidad and left straight from the airport to visit him at a clinic. I could barely recognize him because he seemed to have aged due to the ailment,” the Jamaican soca lover said.

A longtime advocate of Rootsman’s music, Simpson said he met Rootsman in the early 80s.

At that time he did marketing and promotion for the Love People label.

Since that time in 2012, together with Rootsman, Simpson also collaborated to produce a compilation entitled “Rootsman” which was released on the Wilco label.

That five-song compilation features two-part recordings of “Something Wonderful 1& 2;”“Wild Goose Chase 1&2,” and the lyrically potent endearing “Not ForThe Swifest.”

The popular calypsonian reportedly died of complications associated with diabetes.

Allegedly, since 2008, he had been frequently hospitalized after all the toes on his left foot were amputated following an injury to an infected big toe.

According to reports Rootsman passed away while seated in his wheelchair.

The soca sensation began his career in 1976 with the Regal Calypso Tent under the wings of Chalkie and Lord Superior.

He toured extensively and regularly performed in Brooklyn particularly during the summer months when Eastern Caribbean nationals opens ‘tents’ and nightly showcases top contenders to the Calypso Monarch contest.

A talented songwriter who was best known for his party hits, Rootsman was also very conscious of his African roots and skilled at social commentary and extemporaneous lyrics.

Fans of the iconic recorder are determined his legacy will remain indelible despite his Aug. 21 passing at his Almond Drive, Morvant, home in Trinidad.

According to his friend and collaborator, “from Labor Day into Columbus Day in October when Miami carnival ends the bacchanal season “Rootsy will be present and jamming.”

In his words, the Tobagonian calypso and soca ambassador Rootsman penned “when you miss me in Miami I will be there…“