Jamaican race car driver Natasha Chang has broken the Guinness World Record, making the fastest ascent up Doi Chang mountain by car. Chang, who has been ranked Number 8 in the Yeah! Motor website ranking of the 25 Most Beautiful Race Car Drivers in the World, was born in Jamaica and is proud of her Chinese heritage, Her unusual background as an Asian driver from Jamaica, as well as her unique status as being a female driver, brought her to the attention of the racing scene early in her career. Also known as “China Doll” Chang, she first made her mark on the international racing scene in 2006 when she participated at the Palisades International Speedway with the Jet Con Race Team. She bought her first racing car, an RWD Corolla DX, in 2008, a year in which she won several Dexterity racing events and a Dover racing event. She has now furthered her list of successes by breaking the Guianese World Record in what was billed as a “no-holds-barred” assault versus Doi Chang Mountain in Thailand. In the event, she was competing against KC Montero to become the fastest driver to complete the 1,000-meter climb in a production car. 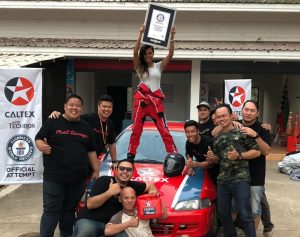 The competition was captured by National Geographic in a two-part series “Record Rides” that aired June 23 and 30, 2019. The automotive reality series featured the radio deejay and racing enthusiast KC Montero against Chang. The challenge was simple: to see which driver could make it up the mountain in the fastest time. The only catch was that they had to source and “soup-up” their own vehicles within a very short timeline. The drivers will break new ground for the Guinness record book as there was no previous existing record for the ascent and no similar effort made by an “every-day” car. 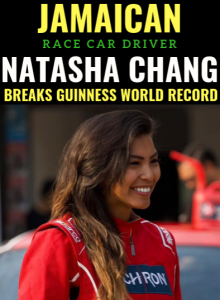 Chang has been involved with the auto industry professionally and personally for her whole life and fought to be respected in the racing community for years. She is proud of her multi-cultural background (Puerto Rican mother and a Jamaican-Chinese father), which she feels lets her see things in a unique way. Her interest in race car driving was inspired by her grandfather who was a classic car enthusiast who collected classic Jaguars, and the two spent their time together fixing the cars and then taking them for rides. When she was invited by a friend to drive a go-kart, she realized she was hooked on racing, and since then she has pursued her driving career, racing in nearly every genre of the sport.