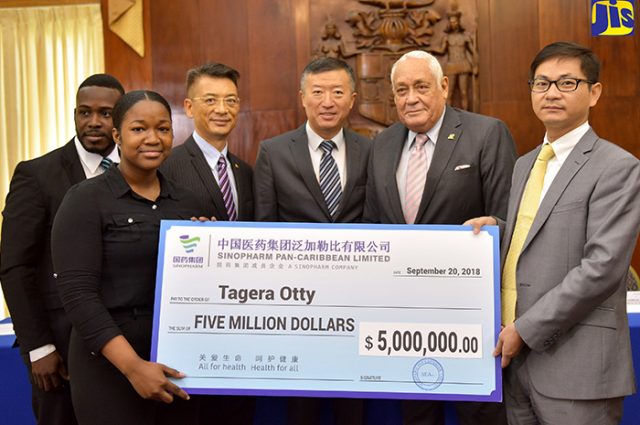 Jamaica’s Tagera Ottey has been presented with a $5-million scholarship from China National Pharmaceutical Corporation (Sinopharm) to study medicine in the People’s Republic of China. Mike Henry, Jamaican Minister without Portfolio in the Office of the Prime Minister (OPM), had made an appeal on behalf of Ottey to the company and praised the firm on its swift response. Henry noted that the Chinese company “rose to the occasion” and “gave a Jamaican a chance to move forward.” He made his remarks at a send-off event for Ottey at the OPM on September 20, 2018. The Minister encouraged Ottey to take the opportunity “in the interest of Jamaica.” Adding that the scholarship award represents an example of the strong friendship between China and Jamaica. China has made significant investments in the country, and Henry urged Jamaicans to “rise and match that investment. Let us try and jointly do so”. Tian Qi, China’s Ambassador to Jamaica, highlighted the fact that China has provided more than 2,000 scholarships and training opportunities for Jamaicans in recent years and that over 16 major Chinese firms have operations in Jamaica. China also has invested US$1.5 billion in Jamaica, and this means jobs and training for hundreds of residents. The Ambassador urged Ottey to return to her home country to serve its people after she has completed her six years of medical studies. According to Zheng Huanming, the director of Sinopharm, said that his company has facilitated professional training for many doctors and nurses since 2016. Ottey thanked Sinopharm for the scholarship, which will allow her to realize her dream of “serving humanity in the capacity of a medical doctor.”