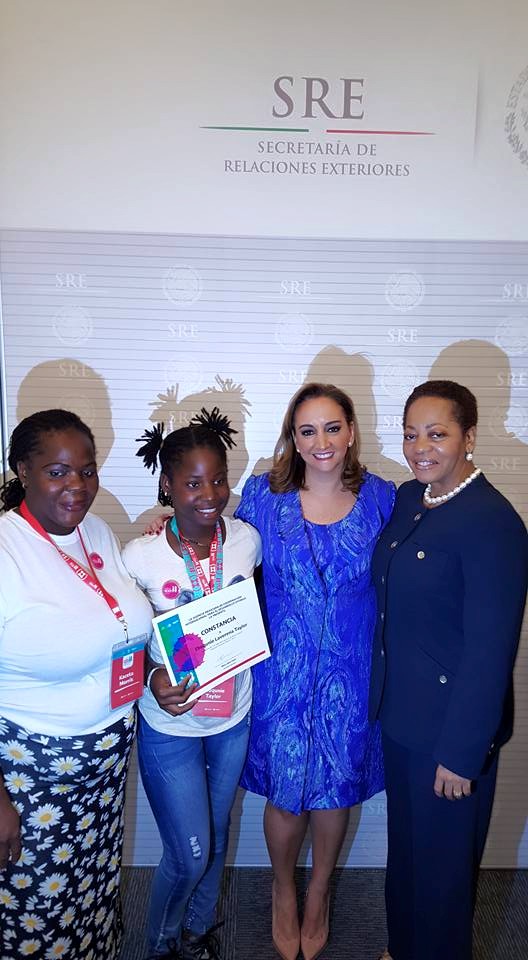 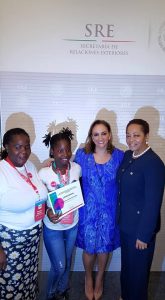 Ebonique Taylor, 12, is a Jamaican student at Drews Avenue Primary School in Kingston, who was the winner of a special painting competition organized by the Embassy of Mexico in Jamaica in celebration of 50 years of diplomatic relations between the two countries. The competition’s theme was “Mexico: A Caribbean Country.” and submissions were judged by children’s arts experts from Mexico’s Ministry of Culture. The judges selected the painting done by Ebonique from among 57 entries provided by children between the ages of nine and 12 in eight primary schools. The submissions were judged on their artistic technique and originality. As the winner, Ebonique was awarded a trip to Mexico with her mother Kaceta Morris. They will visit Mexico between June 17 and June 24, 2016. Tickets for the trip were donated by the Moon Palace Jamaica Grande Hotel. Her Excellency Mrs. Cecelia Jaber, Ambassador of Mexico to Jamaica, believes the best ambassadors are a nation’s children, as they have an openness that is sometimes lost on the way to adulthood. On their visit to Mexico, Ebonique and her mother will see a Children’s Museum and Mayan pyramids, among other sights. Ebonique’s painting was called “The Colors of Jamaica and Mexico,” and it was the swirling colors that attracted the attention of the judges. The painting displays the colors of the Mexican flag “dancing” with the colors of Jamaica’s flag, separate but joining together, showing how Ebonique had thought about how the two countries were separate but also connected. As an additional prize, Kamina Johnson Smith, Jamaica’s Minister of Foreign Affairs and Foreign Trade, announced that the Ministry will make it possible for Ebonique to participate in a four-week-long summer course at Edna Manley College for the Visual and Performing Arts in July 2016.