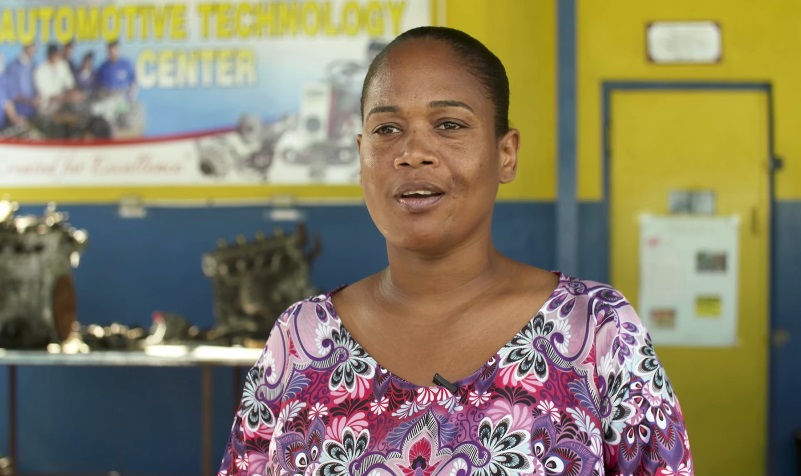 Tracy-Ann Hall, who teaches automotive technology at Jonathan Grant High School in Spanish Town, is one of ten finalists chosen to compete or the 2017 Global Teachers Prize sponsored by the Varkey Foundation. The ten finalists were selected from among 20,000 nominations from 179 countries. The prize, which is presented every year to honor an exceptional teacher who is making outstanding contributions to the profession, brings a monetary aware totaling US$1 million.

Because of undiagnosed dyslexia, Hall did not enjoy success during her own school years. She trained to be an automotive technician and took a job in a garage before moving to the field of higher education. Her experiences with teaching other mechanics prompted her love of teaching. Hall attended the vocational teachers’ college in Jamaica and graduated at the top of her class after three years.

In her first class as a teacher, she motivated a group of 30 boys, who had been “written off” for their poor performance, to establish a class library and write reviews of every book in it. With her encouragement, the boys became so motivated that, by the eleventh grade, eight joined the school choir, and one became the school’s Head Boy. Her class was the first automotive exam class to achieve a 95-percent pass in the history of the school.

Hall considers her classroom as a workshop and showcases the achievements and goals of her students on charts on the walls. She has taught at several schools, achieving high success rates at every one. Hall has convinced business leaders in the automotive industry to sponsor scholarships and is very good at finding just the right materials for her classes, a challenging task as it is difficult to find funds for these materials. Again, Hall makes partnerships with automotive sector businesses, which allow students to use their facilities and spare parts. Hall has also hosted summer schools for low-income communities and has won multiple awards at the schools where she has taught.

The other nine finalists for the 2017 Global Teacher Prize are: