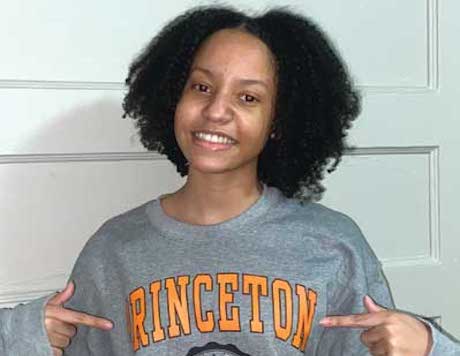 Kimberly Cross, 17, a Jamaican student currently attending East Orange High School in New Jersey, has made her mark on history by becoming the first student from that school to be accepted by an Ivy League university. Cross has been given a full scholarship to attend Princeton University, beginning in September of 2021. Cross attended Immaculate Conception High School in Jamaica until tenth grade when she migrated to New Jersey. At her New Jersey high school where she has spent just over a year, she maintains a perfect 4.0 GPA with As in every subject.

In an interview with The Gleaner newspaper, Cross’s mother Kay Clarke described the economic and other challenges she faced raising her only child; however, in spite of all the hardships, she said Kimberly kept her focus on her educational goals. Clarke said she was moved to tears when her daughter was interviewed by school board members about her achievement and said that Kimberly was “phenomenal and tough” in the interview.

Kimberly has earned respect and admiration from her schoolmates and her community for the praise she has received for her excellence in academics and her many extracurricular activities. In addition to her strong academic performance, Kimberly is a member of the East Orange Campus Debating Society and of the Gifted and Talented Program at the school. She is president of the Spanish Honor Society, and she writes poetry in her spare time. She is active in the East Orange Campus Social Justice Union, a group dedicated to educating, empowering, and inspiring the community about issues relating to social justice, including police abuse and racial inequalities. Before the COVID-19 pandemic imposed restrictions, Kimberly was also involved in track and field at her high school.

Kimberly said she was very excited about entering Princeton University. Commenting on her achievement, she told The Gleaner, “I don’t even know how I did it, but I had no choice but to be successful and keep my grades up. I promised myself that I would not let my grades drop because of extracurricular activities or other things I was doing.”

She plans to major in biology at Princeton and is considering a minor in political science. She is currently unsure about her ultimate career path and says she will make a choice of one of those two areas in the future. One of her immediate goals is to collect her poems and make the collection into a book.