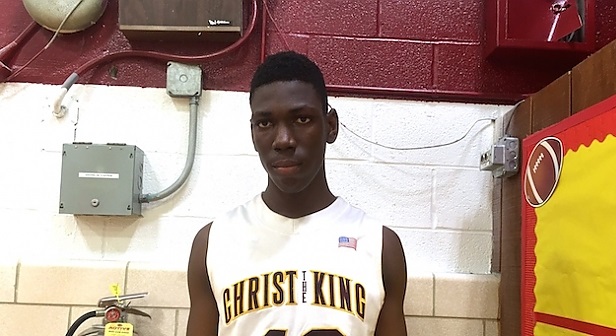 Jamaican Kofi Cockburn moved from Kingston to New York eight months ago after listening to stories about the opportunities available there and how he might have a brighter future in the United States than on the island. Now, Cockburn, who at age 15 is 6′ 11″ and weighs 245 pounds, is enjoying a new life as a talented basketball athlete. Cockburn played on the freshman team of Christ the King high school in Queens and helped the school achieve a championship. He currently plays on the AAU circuit on one of the best teamsin the city, the Rens, and is a starter with the 16-and-under team. Cockburn received an invitation to attend the Nike Elite 100 Camp in St. Louis, Missouri, a program that attracts the best basketball prospects in the country. Both St. Louis and vCU have offered scholarships. Along his road to success, Cockburn has had the support of his mother, Dorothy Wray, who moved to New York five years ago and prepared him for the “culture shock” of the move. Kareem Memminger and Stephen Johnston who operate Jamaica Basketball Development, an organization that provides scholarships for talented players to attend U.S. high schools, are Cockburn’s advisers. While Cockburn played soccer growing up in Kingston, he realized he could be better at basketball because he was built for it. Describing his experiences in the U.S. so far, Cockburn says he is achieving things he never thought possible, but that the first few months of his new life had still “been real challenging.”