Jamaica Tops List of Countries with Most Female Managers - Jamaicans.com According to a study of 108 countries conducted by the International Labor Organization (ILO), Jamaica has more women managers than any other country in the world. The study found that 59.3 percent of company managers in Jamaica are women. Henriette Kolb, head of the Gender Secretariat at the International Financial Corporation, said the report shows that evidence-based public policy design and “gender-smart” practices in the private sector make a big difference in allowing more women to rise to management positions. 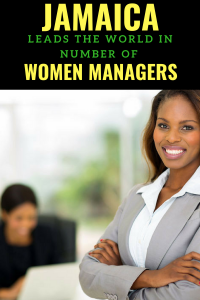 The Caribbean region overall has the most women managers in the world, with Colombia having 53.1 percent women managers, St. Lucia with 52.3 percent, Panama with 47.4 percent, and Guatemala with 44.8 percent. Comparatively, the report ranked the United States in 15th place with women in just over 40 percent of managerial roles. Britain ranked at Number 41 with 34.2 percent of its managers being women. The United Kingdom is one of four nations in which women hold more than 20 percent of board positions; the others are Sweden, Norway, and Finland.

More women are employed now than at any time in history, and the increasing prescience of women in the job market has been cited as the most powerful engine of global growth and competitiveness in the world, according to the ILO. Women hold more than 40 percent of all the jobs in the world and own and operate some 30 percent of the world’s businesses.

Women in leadership positions are most commonly found in small enterprises. The ILO found that, in general, the larger the company, the less likely it was to be headed by a woman, although all-male company boards are decreasing in number. Norway has the highest percentage of companies in the world headed by women with 13.5 percent, and Turkey is second with 11.1 percent.

Additionally, the report noted that firms with more women in top management positions generally perform better than others, although the ILO did not establish a direct causal link between the two factors.

The countries with the highest percentage of women managers, in order, as listed in the ILO study were Jamaica, Colombia, St. Lucia, the Philippines, Panama, Belarus,  Latvia, Guatemala, the Bahamas, and Moldova. Among the lowest ranked countries were Portugal, India, and the United Arab Emirates. Yemen is the country with the lowest percentage of female managers at two percent.

Deborah France-Massin, director of the ILO’s Bureau for Employers’ Activities, noted, however, “There is a long way to go before we achieve true gender equality in the workplace, especially when it comes to top management positions.”