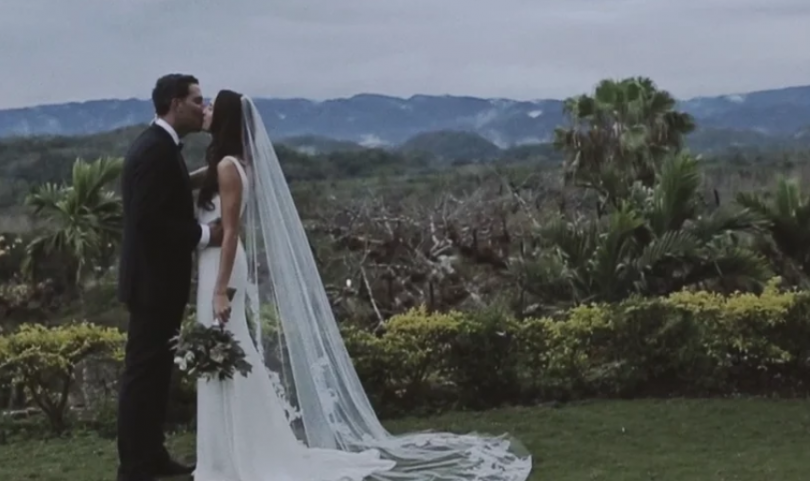 The “low key” wedding of Sofia Hart and Adam Epstein in Jamaica was the subject of a feature in Vogue magazine. They both grew up on the island and have links to family and friends that go back generations. According to the bride, Jamaica is a small place where everyone knows each other, and after a beach party in Kingston, she and her future groom began dating. After dating for ten years, the couple moved to New York City but were looking for an apartment to share in Kingston. When Sofia was called by Adam to look at the “perfect” apartment, he surprised her by getting on one knee and asking if it was “a good place to start the rest of our lives together.” Sofia and Adam were married on March 19, 2017, at her family’s 18th-century estate “Good Hope” in Trelawny. It is a tradition in her family to be married on the steps of the Great House. The reception was held down by the river. Sofia wore a wedding gown by Vera Wang. Her hair was done by Rochelle Gordon, and her make-up by Sue Greg. Sofia described her look as “simple and natural” because she wanted “to look like myself.” The day before the wedding, the couple hosted a beach party, selecting a date in March before it got too hot, with a lesser chance for rain. “But of course, it did rain on our wedding day!” Sofia said. The couple’s vows were a modern interpretation of the seven blessings Jewish tradition, which involved asking seven of their cousins to each read a blessing to the couple as part of the ceremony. Each one had a theme: love, humor, play, a loving home, wisdom, health, creativity, and community. While planning the wedding, Sofia said she relied on the words of her grandmother, “If you are getting frustrated by your fiancé’s lack of opinions in the planning phase, just remember – if he had an opinion, then you would have to factor it in.”