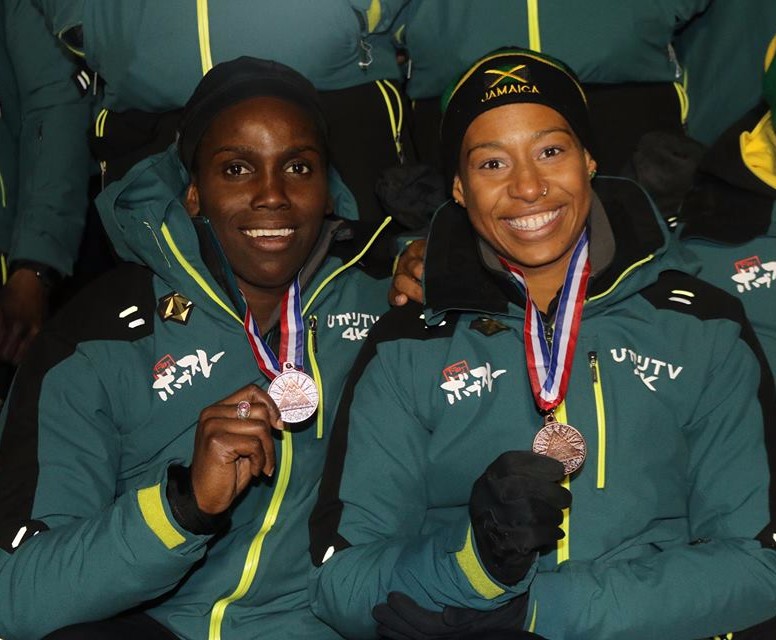 Jamaica wants to qualify a women’s bobsled team for the first time to compete in the 2018 Winter Olympics in Pyeongchang. The effort has been given a boost through a new sponsorship deal with Manubeni Corporation, a Japanese trading firm and a major shareholder in Jamaica Public Service Company (JPS) Limited. The company will sponsor a Jamaican team comprising driver Jazmine Fenlator-Victorian and brakewoman Carrie Russell.

Fenlator-Victorian. 30, competed in the event for the United States at the 2014 Winter Games in Sochi with Lolo Jones, a former World Indoor 60-meter hurdles champion. They finished in 11th place. Fenlator-Victorian, who is from New Jersey, is qualified to compete for Jamaica because her father, Cosman Fenlator, is from the island. While she had thought of retiring after Sochi, she has decided to continue in competition with a goal of leading the first Jamaican women’s bobsled team in 2018. Fenlator-Victorian joined Jamaica’s team in July of 2015 following the launch of the Jamaican Bobsleigh and Skeleton Federation (JBF) initiative to qualify a women’s team for the 2018 Winter Olympics.

In 2016, the team signed with the Shitamachi Bobsleigh project, another Japanese firm, which guaranteed them three “high-quality” sleds. Fenlator-Victorian and Russell have been competing internationally since then, with their best result to date a third-place finish in a leg of the North American Cup at Lake Placid, New York, in January 2017.

The team’s partnership with Manubeni allows the duo to compete in more international events during the new season. According to Nelson Stokes, chair and president of the JBF, the partnership has been very motivating for the team, giving them new energy and commitment to the goal. Whether or not the team qualifies for the 2018 Games or wins a medal, the effort has placed Jamaica on the global stage and added confirmation that the country’s small size does not limit its capability to achieve greatness, he said.

The Jamaican bobsleigh program began in 1987, fueled by the nation’s achievements in sprint events. The team competed at the Calgary Winter Olympics in 1988, but failed to finish in the four-man competition. Their effort inspired the 1993 Hollywood film “Cool Runnings.” The Sochi 2014 appearance of the team was their first at the Olympics in 12 years. The team of Winston Watt and Marvin Dixon finished in 29th place in the two-man competition.