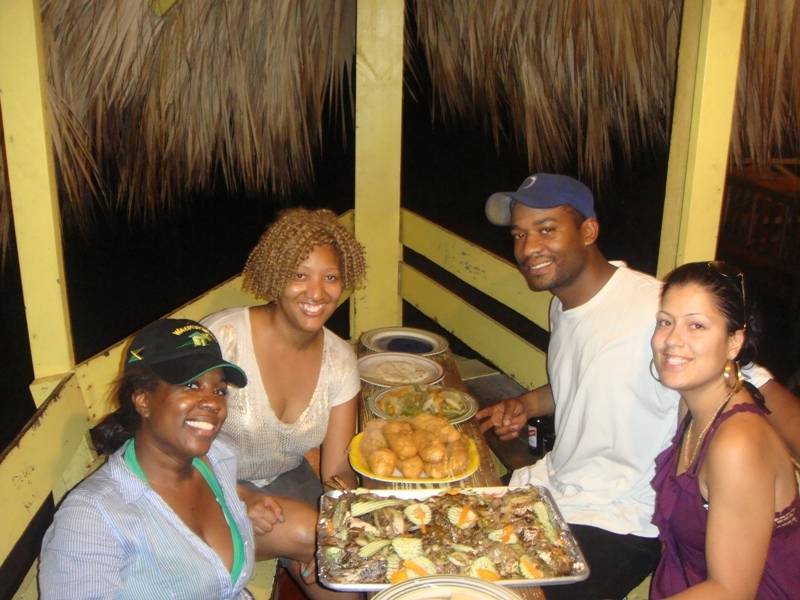 We have a conversation with award winning filmmaker, Diana O’Gilvie as she delves deep into Jamaican jerk cuisine with her upcoming film “The Jamaican Jerk Tour.” Diana explores Jamaican jerk cuisine’s humble beginnings to its rise on the global culinary stage.  Diana plays host in the film as she traverse from the streets of Kingston, the hills in Walkers Wood and to the birthplace of jerk, Boston, Portland.  The tour hops across the ocean to Florida, New York and New Mexico to feature young, innovative chefs and their interpretations of Jamaican jerk spices.

How did you get started doing films, did you go to school or are you self-thought?
I’ve always been a visual person and I fell in love with the moving image after my first Bachelor’s degree in Journalism.  I then went on to Long Island University in Brooklyn, New York to do a Master’s degree in Film and Video Production.

How many films have you created?
I’ve created two documentary shorts, “Does Hair Matter?”A film about Black women’s concept of beauty.”Chasing Daddy” is my last film and it deals with women’s self esteems when their fathers are absent from their lives.

Tell us about your latest project Jerk Tour?
“The Jamaican Jerk Tour” is a project of my love of Jamaican food, especially jerk.   I kept thinking about showcasing Jamaica’s indigenous food on film.  Sure, you’ve seen it on the Travel Channel and travel webisodes, but I wanted to delve deeper.  Jerk is a cultural phenomenon that is now on the global stage and I want to show the humble beginnings of that, then elevate it by showing innovative recipes from world renowned chefs in Jamaica and abroad. So in the film you will see the jerk shacks of Vineyard Town, the Red Hills Road line of jerk pans then we go into high end gourmet kitchens where jerk is the star of these recipes.  The street cooks get as much respect as the culinary trained chefs in my film.

Why did you want to do this project?
As I said, it’s a source of pride for me as an ultra-proud Jamaican. The idea formed when I saw that President Barack Obama was served jerk catfish at one of his fundraisers in Washington.  I remember thinking, “Look at that!  The leader of the Free World is eating Jamaican food.”

Who is the audience?
The target audience is all who love Jamaica and Jamaican food.  Foodies, chefs and people who like to make their own jerk sauce can steal a tip of two from the many recipes featured in this film.

Will there be subtitles for non-Jamaican speakers?
Absolutely.

Do you have full funding for the project? If not how can others help?
Thanks for asking this question!  Walkers Woods has been very good to the film’s funding.  Along with StooshPR, Ted LABS and Cupcake Jubilee.  However, their contribution is just a fraction of the film’s US$19,000 budget.  The rest is coming out of personal contributions from friends and family and my own pockets.  It’s been very hard to garner corporate sponsorship financially.  Everybody just want to give products, but no money and I can’t pay my crew with just drinks and food.  So filming has been slow and I do it stages.

If anyone reading this will like to contribute, you can use the secure Paypal link .  I thank you in advance for your donation.  Every little bit helps.

When will the film be released?
That depends on fundraising. I am looking to release it in early spring 2012. But at this point, I feel that’s a bit too ambitious.

With the emergence of technology that now allows anyone to create a film do you think it is watering down the art of film making?
Ah, no I don’t. In fact  I like what all this technology is doing to film making.  The barriers to access are now lowered, and more innovation is coming through via flip phones, iPhones and all sorts of gadgets.  The art of telling a story is a lifelong learning process and a good story isn’t watered down.  Gone are Hollywood and old fuddy duddy expectations in film making.  Stories can now be told in 10 minutes for web consumption and there are some great 10 minutes stories out there.  Because of the You Tube phenomenon, there are now production companies that are strictly catering to filmmakers that make web videos.  So filmmakers have other options outside of the Hollywood boy’s clubs.  Shooting on film is becoming de passe, more and more filmmakers are using HD and editing on non-linear programs like Final Cut and Avid.  It is now cheaper to make a film, so someone can say to him/herself, “Hmm I bet my cat running up a slide would be a good movie.”  But as educated consumers we can sort through that fluff and find good stories.

Do you think in the future reality/documentary type films will dominate the industry similar to how it dominates TV?
Documentary making is reality TV.  As documentarians, we put the camera lens in front of life to illuminate a particular aspect of society.  I have a problem with scripted reality tv.  My film’s aren’t scripted.

Any chance we will see this at a  film festival?
In the words of emcee Tommy Cowan, “Yes Indeed!”  I plan to pump this baby through the festival pipelines worldwide.

What is the best documentary you watched recently?
It’s hard to choose.  “Restrepo,” “Food Inc.,” “Born into Brothels” are all films I’ve seen in the past month, and all tugged at my heart strings- the hallmark of a good documentary is to extrapolate emotion.

Are you working on any other film projects?
Right now it’s all about “The Jamaican Jerk Tour”

The best career advice I was ever given was…
Keep practicing, keep working, keep filming, keep writing.  This way, when the opportunities come, you’ll be ready. (Thanks Larry Banks!)

What is playing on your mp3/player today?
I love me some Adele!  That girl can sing.  I am also a huge fan of 80’s dancehall so I keep Yellow Man, Super Cat, Josey Wales and Admiral Bailey on heavy rotation.  Latin jazz is always a good time for me so I play Gato Barbieri and anything from Sergio Mendez.

Mac or PC?
Mac all the way!  Dem just too sexy!

The guilty pleasure I can’t live out…
Sweets!  And I don’t care what form, from Jolly Ranchers to gourmet cupcakes.

Thanks for the interview. Any closing thoughts.
Nuff respect to the Jamaicans.com team!  I’ve been following you for quite sometime now and I am impressed with the content, especially the recipes!  I’ve created a Facebook fan page for the film “The Jamaican Jerk Tour” go on the page, ‘like’ us and share your favorite jerk spots and recipes. You can also see pictures from behind the scenes filming in Jamaica and New York and also meet the sexy chefs cooking up delicious jerk cuisine.

If you would like to help or learn more about this project visit The Jamaican Jerk Tour page.