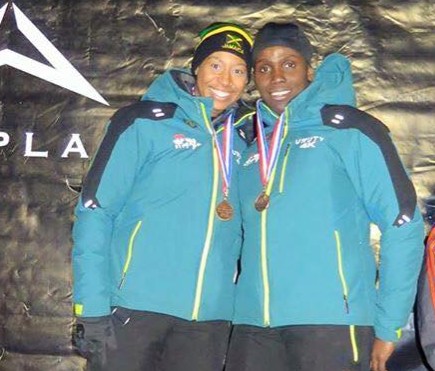 The female bobsled team from Jamaica was awarded its very first medal at the North American Cup Bobsleigh and Skeleton competition. Driver Jazmine Fenlator-Victorian and brakewoman Carrie Russell won the bronze medal after the final leg of the competition in Lake Placid, New York. The medal represents a significant step toward the team’s goal of going to the Winter Olympics in Pyeongchang, South Korea, in 2018. The North American Cup staged its first leg in Calgary, Canada, from November 6 to 14, 2016, followed by the second leg in Whistler, Canada, from November 16 to 26, 2016. The third leg was held from January 3 to 12, 2017 in Park City, Utah. Writing on her Facebook page after the win, Carrie Russell thanked God for the opportunity to join the bobsled team. She said she knew nothing about the sport when she left her track and field career to follow her dream. Russell noted the many months of travel and training that culminated in the victory she shared with Fenlator and the rest of the team. The women made Jamaican bobsled history with their bronze medal. Russell thanked her coaches, family, and friends for their support and said she looked forward to “making more history as a world athlete.”