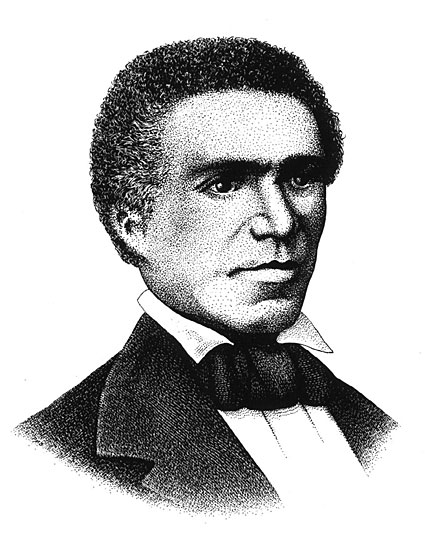 John Brown Russwurm was born in Port Antonio, Jamaica, the son of a black woman and an English merchant. He lived in Jamaica until his father sent him to Quebec at age eight for a better education. He and his father moved to Maine in 1812; his father died shortly thereafter in 1815, but not before changing his name from John Brown to John Brown Russwurm. John lived on with his family after his stepmother remarried. They continued to encourage his education and helped him to enter Bowdoin College. He was the first African American to graduate from that college and the third African-American to graduate from college in America.

Mr. Russwurm became interested in Black liberation during college. He wrote term papers on Toussaint L’Overture and his graduation speech focused on the Haitian Revolution. He considered immigration to Haiti or teaching in Boston but decided to move to New York where he met Samuel Cornish. He and Cornish, a Presbyterian minister edited and published the very first African-American newspaper, “Freedom’s Journal”, which first appeared in 1827. It was started as a response to the racism of established media, an advocate for abolition and education of free Blacks. Russwurm eventually converted to the belief that Blacks could only prosper through recolonization to Africa. As a result, Cornish left the paper and the newspaper’s readership turned against Russwurm. In 1829, he left the newspaper and immigrated to Liberia.

Liberia suffered a dearth of Black intellectuals during this time and Mr. Russwurm was much in demand.He worked as Colonial Secretary for four years and edited the Liberia Herald for five. In 1836 he became the first black Governor of Maryland County, Liberia. He learned many African languages, established positive relationships with neighboring nations, encouraged African-American immigration and worked diplomatically with whites. His administration also supported and enhanced agriculture and trade. In 1833, John married Sarah McGill, daughter of the Lieutenant-Governor of Monrovia, Liberia,they had four children. A monument has been erected to Mr. Russwurm on the island off the coast of Liberia.