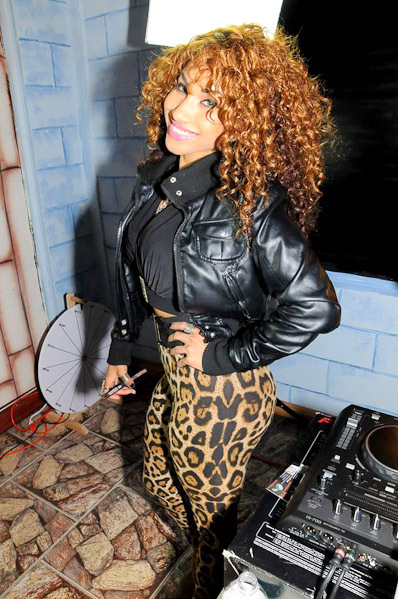 This week we have a conversation with Jamaican singer, Karian Sang. Born in Kingston, Jamaica the young artist Karian Sang (formally known as lil precious) started singing at a young age. She quickly discovered that her Jamaican ancestry blessed her with rhythm in her soul and a beautiful voice. Lil Precious’ first album first single “So Insane” was added to Top 40 radio stations across Canada. In 2010 the second single “Ma Jam” was also added to radio and TV ( Much Music/Much Vibe). April 2011 Karian Sang/Lil Precious won her five WRCMA awards.

Currently going back and forth from Canada to Miami Karian sang has created a buzz for herself, Her latest single “take it” ft Mavado who is part of “we the best” has been premiered on the billboards and has been number 1 in the UK, Toronto, Australia ect… Karian sang has two mix tapes that have done very well “assassin in training”, “assassin unleashed” and her latest mixtape “grammy’s” produced by supreme: also including producers Sean Klassic, Troyton Hind, Di Genius, Pay attention, High Volume, Ice Music Media and Optimas with original tracks also colabartions with Mavado, Shaggy and Andi Ites. Here is our conversation with Karian Sang.

Q: Tell us about your background and how did you get started singing?
Karian: I’m Jamaican born raised in Canada mix with chinese, black, west indian, cuban and scottish I grew up on dancehall music starting falling in luv with other types of music as well I had a hunger for learning everything became exciting to me in the music world, I started doing lil shows had a group,  soon after my brother became my manager.

Q: Tell how about your song “So Insane” that was on the charts in Canada? Did you write the song? What was your inspiration to write the song?
Karian: So “Insane” was the first single off my album “Every step” that did very well produced by Iron Ryan written by myself about a guy I had a crush on, I usually write about things in my life like people places or things around me, I was basically describing the feeling I got from meeting him…. I guess i was kinda telling erryone ma business lol

Q: You have a few singles out there. When can we expect your second album to be released?
Karian: Well first I will be releasing my 3rd mixtape which is very important to me called Grammys “everything I feel everything I think” 23 tracks with 3 skits 4 remixes and rest originals songs after that there will be an album but I’m hoping we can all marinate on Grammys for a bit lol 😉

Q: How would you describe your sound?
Karian: New but familiar! timeless

Q: Your recently collaborated with Mavado on his single “Take It”. What was it like working with him?
Karian: Working with the supa star was exhilarating I found it to be very different from what people say or think about him, he’s considerate and pushes to be greater each day he’s been very motivating both for my talents and for my understanding of the music biz.

Q: Are there any future collaboration with other artist in the works?
Karian: Yes, many! My plan is to work with the all stars u name em i want’em lol. I luv surprises so u guys gone afto wait for the name dropping. lol

Q: What projects are you working on right now?
Karian: I’m currently working on my mixtape single & music video for “HOT GAL TING” the remix of “March Out” by Mavado produced by DJ Frass which is very exciting for me cause I made it for my hot gal assassins, gotta rep ma girls!

Q: I know it is early in your career but what is your proudest moment so far?
Karian: When “take it” premiered on billboard and watching a bunch of dance crews at a club dancing to take it live so dope, the lil things mean alot too..Q:If you were stuck on a deserted island and given the choice of 2 albums to put on your ipod which artist would it be?
Karian: If I had to pick just 2 it would be boyz11men evolution and 2pac all eyes on me, I luv balance

Q: My favorite guilty pleasure is
Karian: Food!! Especially chocolate I believe deep down inside me I’m a real fat girl waiting  to come out lol

Q: My Mother always told me…..
Karian: …cover it up and they will always want to unwrap it 😉

Q: Seven day, six nights, all expenses paid, my vacation destination is…
Karian:  Egypt i luv to explore I wanna see the world before ours

Thanks for your time. Do you any closing thoughts?
Karian: Yes! I really wanted to say Jamaica for my vacation destination but I didn’t want to be conceited about my home but it’s the best place to have a vacation 🙂 especially for food!!!! lol